“Hello, fellow anomaly. Who are you?” read Trevor Noah, from his New York Times best-selling book Born a Crime, quoting an Indian boy from his elementary school days who noticed Noah’s paralysis in being an “in-between” race: not completely Black, and definitely not white.

It wasn’t until he spoke a variety of African languages to his fellow Black schoolmates that they accepted him, and Noah chose which side to be: Black.

On Oct. 15, Noah appeared before an audience of Medill students (and a few lucky others) in Cahn Auditorium to discuss race and identity in the current state of America. Sponsored by the New York Times as part of their “Get with the Times” speaker series, the event was meant to engage young people about topics that we face in the world today. Current Times reporter John Eligon (Medill '04) moderated.

The host of The Daily Show spoke about his identity as an Black African in America, what it means to understand America as an immigrant, and what it’s like to lead dialogue on controversial issues in an atmosphere that often asks us to isolate our ideas to one side or the other. 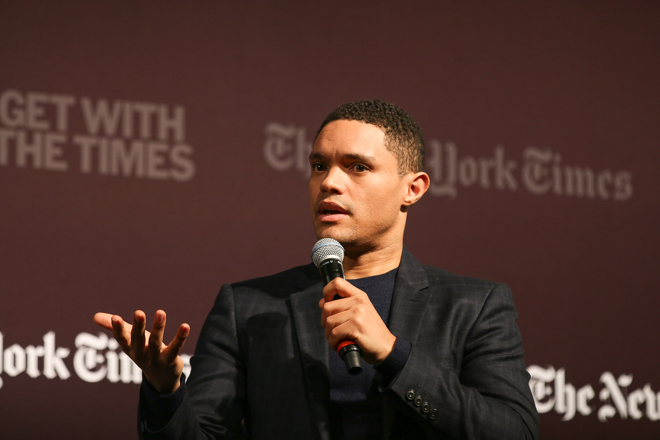 For Noah, who grew up in South Africa, America always occupied a sort of gold standard of what it meant to be Black.

“I always identified and aspired to Black Americans,” Noah said. “I saw these people who were the coolest cool you could imagine. You were watching these Black people who existed in a way I had never seen before. They seemed to command respect in their world beyond just who they were but also in how they made the people around them feel. There was a coolness about them that was very powerful. It was aspirational. It was aspirational beyond the circumstances people found themselves in.”

Having grown up during Apartheid, Noah was accustomed to referring to color rather than race. He outlined how, as a child with a Swiss dad and an African mom, he was viewed as colored, and sometimes occupied a higher status than those who were solely considered Black. Thus came the feeling of being an anomaly, until race in America made him confront the idea that there was only “white or Black.”

“Coming to America, it’s very much Black or white,” Noah said. “The race side of it is simple. And then you get into the complexities of how you interpret what is happening to you because of your race.”

But compounded on race was the aspect of being an immigrant. As an African, Noah found the idea of returning to Africa as the “homeland” another way in which he understood race differently from the cool Americans he idolized in childhood.

“I didn’t understand why Black Americans would aspire to Africa,” Noah said. “I found it hilarious. You don’t realize how many Black Americans have been robbed of a place they believe is their home, and a culture, and a story.”

Weinberg sophomore Ben Chase appreciated these subtleties, even just between the two hosts.

“As shocking as it is, it isn’t very often you get to witness two Black men from different backgrounds having conversations on race," Chase said. "And just being exposed to that and knowing the situation going in ahead of time was a really valuable experience.” 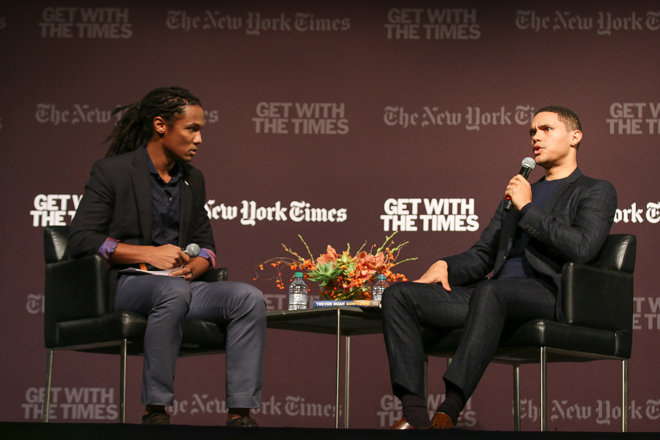 John Eligon interviews Trevor Noah. Eligon was born in Trinidad and Tobago and works for the Times out of Kansas City.

The dream of being the cool, powerful Black American, however, soon ended as Noah faced the realities of race in America, and especially as the country became, as Noah calls it, “America, dealing with Donald Trump.”

“One of the things that I guess surprised me and shocked me the most was when you come from the African continent, when you are an immigrant, you are prone to believing that all you have to do is behave and then the world will treat you appropriately,” Noah said. “And then I remember when I discovered that’s exactly what Black people in America had tried over and over again. And then seeing how even that wasn’t enough. It wasn’t so much about what you were doing, but more about who you are.”

Despite this grim reality, Noah, as the host of The Daily Show, is one of the people most willing in media to push the bounds of controversy, to discuss the topics we shy away from interacting with.

As videos were played of college students around the country who had sent in pre-recorded questions, Noah had some advice for engaging in full, meaningful dialogue: “I think punching works really well.”

But then, in seriousness, Noah shared real wisdom.

“People have ideas,” Noah said. “These ideas may have been against you even existing. I think we can always start from a place of empathy. What if I’m wrong? Let me take your truth, and then poke holes in it. After all, how do you know your ideas are good if you don’t test them?”

“It really spoke to me when he was talking about listening to the other person’s side,” said Weinberg freshman Jason Asenso, “and viewing your own ideas and seeing if they’re right and why they’re true and even if they are the correct view to have or not.”

Though Noah declined to be categorized as a journalist, he did stress the importance of good journalism, with an apt message for all the journalists in the room: “The best comedy is based in truth and I’m trying to make the best comedy, so I will always be bound by the truth.”

“I felt very proud of our school during the event, and I thought it was really cool to be surrounded by our school community and bring in someone like Trevor Noah to talk about issues that are so controversial,” said Medill freshman Carly Rubin. “And even though the issues were so controversial, it was a warm and welcoming community and the conversation just kind of flowed.”

Eligon ended the night with a cheeky question about Noah’s comedy. He asked for a joke on race that would get Noah in trouble on Twitter. Noah declined, not out of worry, but out of purely being unprepared.

“Love me or hate me, but don’t be indifferent,” Noah said. “And that’s the way I live my life.”