Which African country was settled by freed slaves? What is the third largest country by area in Asia? Maputo is the capital of which country?

If you reflexively wracked your brain for the answers, you’ve probably played the widely popular Wildcat GeoGame, a daily geography trivia game open to all Northwestern students. (The answers are Liberia, India, and Mozambique, respectively.)

Hosted online by The Daily Northwestern, the game was created through a joint effort by Medill, Northwestern University Information Technology, Research Computing Services and University Libraries with the goal of educating the Northwestern community about world geography. The reward? Free Blaze pizza. 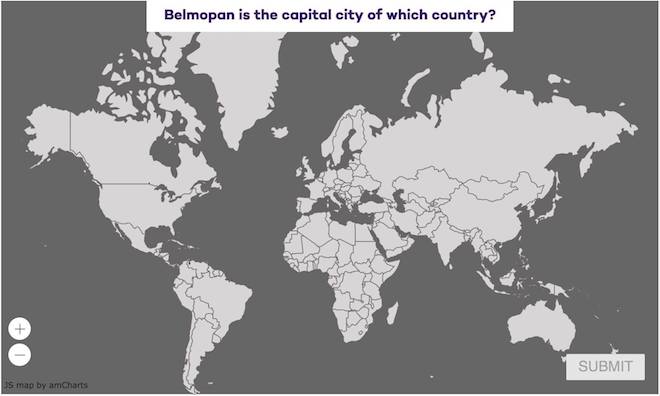 Medill professor Candy Lee first came up with the game as a way to foster global-mindedness among Northwestern students.

“We think of ourselves as a global campus,” Lee said. “So maybe the first of line of thinking at a global campus is ‘Where is everybody around the world?’”

Lee suspected many college students were not very familiar with world geography. Curious if this was true at Northwestern, Lee tested her hypothesis in 2016 by asking students across the university where Kenya, Nigeria, Haiti, Syria and Uruguay were located. Her suspicion proved correct – many students were unable to locate any of the 5 countries.

At first, Lee thought the dismal results could be explained by the lack of focus on geography in many American schools. According to the 2014 National Assessment of Educational Progress, almost 75 percent of eighth-graders in the U.S. tested below proficient in geography. But Lee found that international students didn’t do much better, leading her to the conclusion that the results didn’t have to do with people’s backgrounds. People simply didn’t know.

The solution? Inspired by academic trivia games McCormick hosted, Lee decided to create a geography trivia game that everyone at Northwestern could play.

To start, Lee reached out to NUIT. But putting the game together was more difficult than Lee and the rest of the team initially anticipated, and they eventually expanded to include the Geographic Information System (GIS) department of the University Libraries and Research Computing Services.

The Wildcat GeoGame has slowly gained traction since its initial creation in October 2016, with over 135,000 interactions by June 2018. This past quarter was its most successful yet, with 5,000 interactions on the first day alone.

Kelsey Rydland, GIS specialist and data analyst at the University Libraries, is responsible for writing the content of the game – questions, answers and post-question factoids.

Originally starting with basic questions sourced from the CIA World Factbook and National Geographic, Rydland has since branched out to include physical geography, political science and two-part questions. While he doesn’t create questions with any specific goal in mind, he said one of the biggest challenges is coming up with questions whose answers are one clickable country.

Rodolfo Vieira, a lead developer with NUIT, is responsible for the game’s interface. The game was built using a serverless architecture stack running on Amazon Web Services. It automatically creates reports listing the quarterly pizza winners. For spring 2018, the breakdown of the winners showed the highest amount of winners earning 3 pizzas, the maximum that could be won.

These results are probably because of the fact that most students look the answers up on the internet, so more people are likely to have higher numbers of correct answers. As of this quarter, the prize has been reduced to 2 pizzas maximum due to the increasing number of players.

“I’m sure [players] Google the answers… but we don’t care,” Lee said. “The intent is to get you to learn.”

“I think an understanding of world geography and world events and where countries are is a good thing, especially in a global society,” Rydland said. “And with technology and things like that, it’s more global every day.”