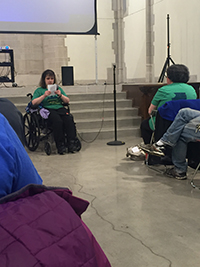 Daniella, a Special Olympics athlete, shares her story as part of the Rally for Respect Photo by Lila Reynolds / North by Northwestern

Northwestern junior Abby Issarraras stopped using the “r-word” when her cousin was born with Down syndrome. From there on out, she said even hearing the “r-word,” the derogatory term referring to a person with a mental disability, hurt.

“I’d be hanging out with my friends and they’d use the r-word, and it would make me feel awful inside,” she said.

Now Issarras is working to end the word entirely. Northwestern students were encouraged to face the hurtful nature of the r-word head-on Wednesday all day at a banner signing in Norris and at a 5 p.m. rally in Seabury Hall.

Both events were hosted by Northwestern to Benefit Special Olympics, The Academy of Arts and Music for Special Education (AMASE) and Best Buddies. Both events were created last year with the goal of expanding awareness and empathy.

Northwestern juniors Matthew Hacker Teper and Adam Farsheed, the coaching co-chairs at Northwestern to Benefit Special Olympics, were both on the ground floor of Norris for most of the day.

As people passed the table, club members asked students to stop and learn about the event, sign the poster and receive stickers, tattoos and wristbands. Signing the pledge to stop using the r-word is important, Hacker Teper said, because the whole event “only works if people know what it’s for.”

Despite the morning’s success and the 178 RSVPs on the “Rally for Respect” Facebook page, turnout numbered closer to 50 people, including about 15 Northwestern students. The audience was predominantly athletes, students and families involved with Special Olympics and musicians involved with AMASE.

“The premise of the event is to foster a connection between Northwestern students and people in the community with special needs,” said Hannah Rudman, a Northwestern junior and one of this year’s organizers of “End the R Word” week. “Even though it’s obvious to me that people with intellectual disabilities are humans beings, too, it isn’t to everyone.”

After showing a promotional video that has been circulating around Facebook about the goals of the week, special athletes told their stories about how the r-word affected them growing up.

“People didn’t understand me when I would speak,” said Lula, an athlete with a severe speech impediment. “And this made me feel like a retard. But I fit into the world by being able to take care of myself. I live on my own. I drive. We are people, just like the rest of you.”

Daniella, another athlete, said that being called the r-word made her feel sad, unworthy, left out and stupid. “People think that if you’re disabled, you’re helpless and hopeless. I can do anything, with some help.”

After the athletes spoke, two of AMASE’s students played their instruments for the audience; Julia played "Baby Beluga" on the harp, and CJ played piano, earning them both thunderous applause from friends and strangers in the audience.

The co-chairs of Northwestern to Benefit Special Olympics invited audience members to join the dialogue about becoming allies on Northwestern’s campus and the effects of misuse of the r-word.

One athlete said that in high school, because of the r-word, she never wanted to go to school. Another said that though he was never called the r-word, he has many friends who were.

“It’s important to have spaces to talk about things you wouldn’t engage with on a daily basis,” said Communication junior Lisa Larbi. “I liked the discussion.”

To finish the program, Michelle Pickett and Rachael Sarette, the executive co-chairs of Northwestern to Benefit Special Olympics, thanked the audience.

Whether you “mean it that way” or not, you should never use the r-word, Sarette said.

“You don’t get to decide what hurts people,” said Pickett.