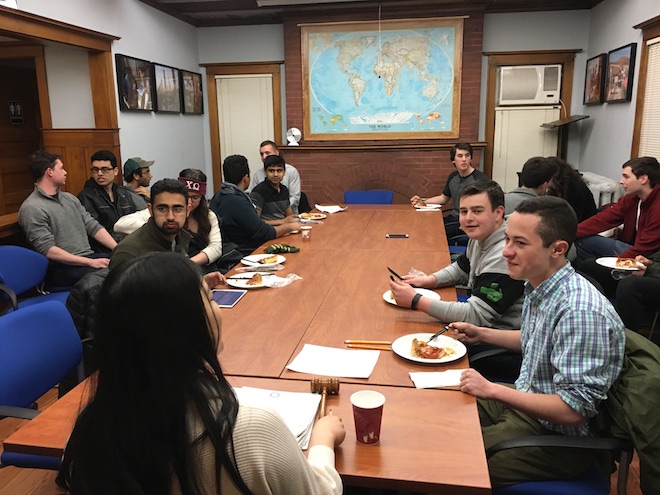 Students discussed the merits of repealing or keeping the Second Amendment at a Political Union debate Monday night.

It was standing room only Monday night at the Northwestern University Political Union (NUPU) debate on the Second Amendment. The event, held at the Buffett Institute, attracted students on both sides of the issue to watch or participate in the discussion.

“I think [the debate] helps people to understand what people on the other side are thinking,” said Weinberg sophomore Dominic Bayer, who argued against repealing the Second Amendment. “I think this is going to help to bridge those divides.”

The debate, titled “Resolved: The Second Amendment should be Repealed,” followed the standard format of NUPU debates: a speaker for each side gave their opening statement, the floor was opened for questions for a few minutes and then the debate began, where anyone could weigh in. One moderator kept the debate moving. Before and after the debate, participants voted on whether or not the resolution should pass.

During the initial vote, twice the number of people voted against repealing the Second Amendment than voted in favor of repealing. While the resolution failed to pass again in the second vote, the “pro-repeal” side gained 50 percent more votes from the first round. The “anti-repeal” side lost four votes.

“I was happy that my side gained more votes,” Weinberg junior Edmund Bannister, who argued in favor of the resolution, said. “I was glad that I was able to convince more people that this was a good idea.”

While Bayer and Bannister were on opposing sides, they did have some common ground: both agreed that gun violence is an epidemic in the US, and they both agreed that some gun regulations were appropriate.

“I think there’s a lot of common ground on this issue, but people just don’t see it because they question people’s intentions,” Bayer said. “And that’s something we need to get over.”

During the debate, one of the most controversial topics was the correlation between mental health and gun violence. Bannister argued that easy gun access increases the number of suicides that happen per year.

“If you have a gun in your home, you’re more likely to kill yourself than someone else,” he said during the debate. Others argued that repealing the Second Amendment wouldn’t really address the real underlying causes of suicide.

Many were surprised that mental health was discussed so thoroughly in the debate.

“We had this debate a few years ago, and suicide wasn’t as big of a topic back then,” said Weinberg junior Sophie Chen, speaker of the NUPU and moderator of the debate. “This is slowly being brought to life: mental health, suicide and how does that connect to gun control.”

Overall, organizers of the event thought the debate was a success and are excited for more debates as the quarter continues.

“Our turnout shows that people care, and that a lot of people care,” Chen said. “And we give them that opportunity to talk to each other.”

This story was updated April 10 at 11 a.m. to reflect clarified voting totals from NUPU.