Twitter is exploding and NASA is crashing, but it’s all good things? Read on to find more.

Is Mercury in retrograde or did Twitter change today?

Mercury goes back in retrograde at 2:30 a.m. EST on December 3, but until then, feel free to express yourself! Or so Twitter says. Today, Twitter began undergoing a major makeover: it began a test trial of 280 character tweets. The purpose for this? “When people don’t have to cram their thoughts into 140 characters and actually have some to spare, we see more people tweeting,” says Twitter, according to the New York Times.

So are others, it seems. However, the longer character length was inspired by non-English languages: Japanese, Chinese and Korean are “languages impacted by cramming,” says Twitter, and increasing the number of characters helps user in these languages find their true voice in their tweets.

A radical change, yes, and subject to fan fury. However, this change may make it easier for users across a variety of languages communicate with more ease, and who doesn’t support that?

Read more on the subject here.

Cassini crashes at the age of 13 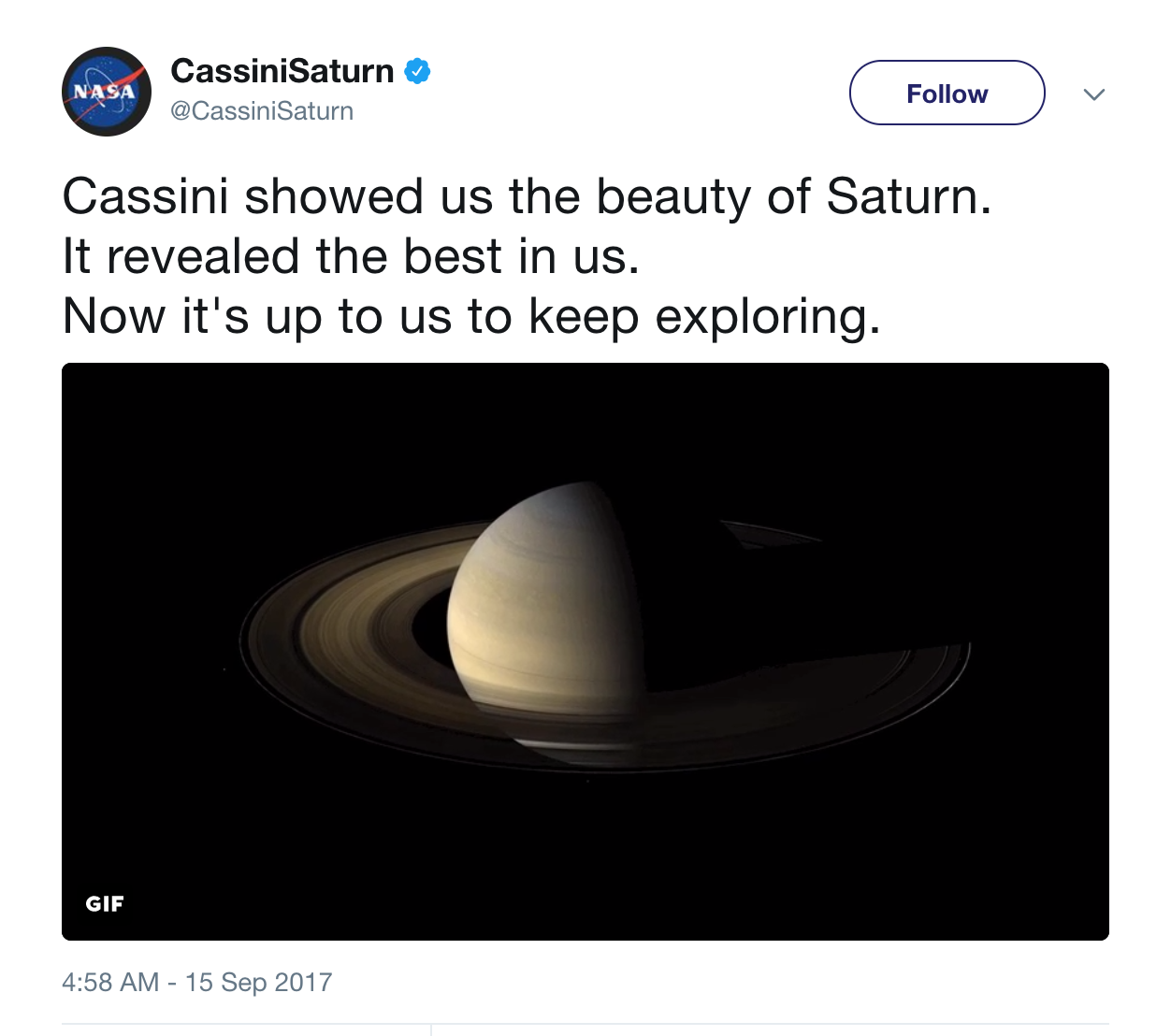 Spacecraft Cassini, one of NASA’s most powerful instruments to date, may have only been 13, but it definitely skipped the awkward phase of puberty and braced teeth. Launched in 1997, but entering orbit in 2004 (and so technically considered 13 – I know), Cassini ended its flight this Friday when it crashed into Saturn after losing contact with Earth. The crash was planned, so Cassini’s death did not come as a shock or a surprise. Instead, its journey was “one of the most successful planetary science missions in history,” according to the Washington Post, because it gave us access to Saturn’s atmosphere and it exposed two new moons: Titan, a moon with methane lakes, and Enceladus, a moon with water jets, and the closest possibility for life beyond Earth.

So is there a Fifth Kind?

Possibly? There are jets of ice and gas coming out of Enceladus’s south pole that contain molecular hydrogen, which is the fuel that allows organisms on the seafloor to live. So, though not much is known yet, it remains to be seen whether there is life on Saturn’s moon.

If Cassini was doing so well, why did the mission end?

In the end, Cassini ran out of gas. Rather than pushing “her” (as the scientists on the project affectionately refer to the spacecraft) further, they planned for the mission to end, because it had already found so much new information and “did exactly what it was supposed to do,” as project manager Earl Maize said to the Washington Post.