Reading from a different page: dyslexia in the college transition
By Laura Zornosa
9:01 p.m. Jan. 10 2017

An invisible disadvantage slips under the radar of many Northwestern students – one that's especially unwelcome in the context of college. On both Evanston and Chicago campuses, 172 students are currently registered with AccessibleNU for learning disabilities, and among them many students with dyslexia. 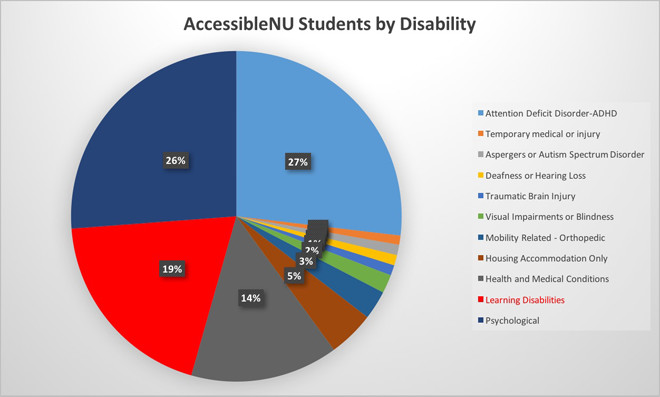 Dyslexia is a learning disability marked by “trouble reading and often spelling words,” said Dr. Frank Van Santen, a clinical psychologist at Northwestern’s Center for Audiology, Speech, Language, and Learning. He further described the condition as either a difficulty in decoding (sounding out) words, word recognition, or a combination of the two.

Yet, in the words of AccessibleNU Director Alison May, “students here don’t talk about when they’re having a difficulty. So then the many students who have disabilities think they’re the only ones, and it’s all the more isolating.”

Transitioning into college is rarely easy. For those with dyslexia, though, the challenge is magnified by struggles with reading.

The shift from high school into college threatens to swallow newcomers with dyslexia in an abyss of exhaustion. Initially, these freshmen may develop unsustainable study habits.

“The kind of coping mechanisms I had in high school aren’t failing in college, but there are not as many hours in the day,” said Weinberg freshman Liam Haller, who experiences dyslexia. “I’ve been struggling with where to prioritize my time, and then I’m falling behind in certain subjects when I’m studying for other subjects.”

Diagnosed in 10th grade, Haller works with a student at nearby Golf Middle School as a diplomat for Eye to Eye, a learning disability mentorship program. The lackluster disability services in his own public high school, however, meant he learned to take responsibility for his own success early on.

“Finding the balance between work life and social life is more difficult in college,” said Haller, “because the incentives to go out socially [are] more present than they were in high school. What it forces you to do, more than other kids, is create a balance in your life between working and playing, because your time is a more valuable resource at that point.”

Life for Haller looks drastically different from an average Bobb Hall resident. He wakes up as early as 6 a.m., studies for hours before classes, and “camps out” in only the dead silent library aisles.

“Rinse, wash, repeat,” he says of this draining cycle.

“I think when you have to work hard, some unfortunately equate that with not being as bright,” said May. “It’s such a cruel irony how bright students have to be when they also have a disability. Being so bright also makes you that much more aware that you’re not performing where you should be. Over time, it can be really anxiety-producing and depressing.”

Yet, as AccessibleNU’s mission states, learning disabilities also present a form of diversity and individuality. Dyslexia forms an aspect of identity, and each student engages with learning and lifestyle in a different way.

“I try not to let it [dyslexia] affect my outlook on life. If anything, I try to make it a positive thing. You’re born with the cards you get, and you just play your best hand,” said Eye to Eye mentor and Weinberg freshman Jack O’Grady. “If it takes me 15 more minutes to get through a reading, so be it.”

O’Grady’s private college-preparatory school provided him with audiobooks for every piece of assigned reading throughout high school. He wasn’t “staying up till 3 a.m. every night trying to read.” At Northwestern, he’s aided by similar disability services.

“I haven’t experienced a negative stigma. If you’re like, ‘I have dyslexia,’ people aren’t like, ‘Oh my God, it’s amazing that you’ve gotten into Northwestern and accomplished so much,’” O’Grady said. “It’s just kind of like, ‘Oh, you have dyslexia, OK.’ It’s a very nonchalant thing; people don’t look that far into it.”

However, sometimes subtle disparity does exist among students, according to both O’Grady and Haller. Haller sees a negative perception of the relationship between dyslexia and intelligence. O’Grady, meanwhile, has encountered complaints from peers who dub his accommodations and time extensions “unfair”.

May acknowledges that higher education itself is a "disabling environment,” and those with dyslexia and other learning disabilities may face less stress in the workforce after leaving the campus. Impairing factors such as timed tests and restricted access to computers are much less common in an working environment.

“When [ANU students are] here, they need to request accommodations and deal with the stigma. When they go into jobs, they might not identify with that label anymore,” May said.

While those with learning disabilities (like dyslexia) are on campus, however, they may shake up the traditional perspective. Through adversity comes a unique resilience, as McCormick sophomore Ryan Albelda explained.

“On my computer, there’s a little Post-It I keep that says: ‘You’re smart enough to be here,’” she said. “Once I realize that ‘wow, I’m really contributing to the conversation, or my ideas work,’ I belong here just as much as anyone else does.”