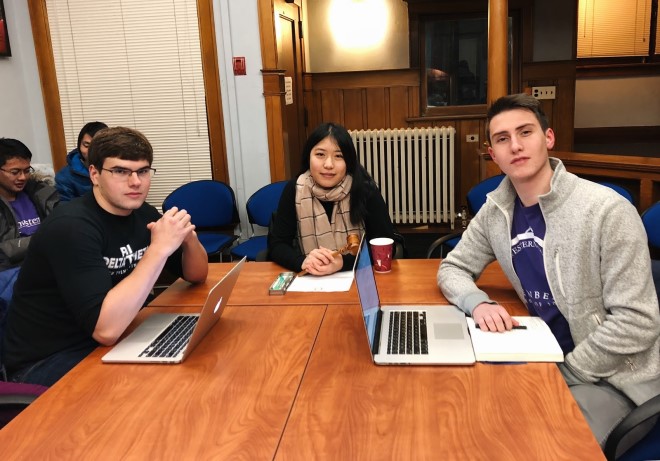 Members of Political Union prepare for the debate on Monday night. Photo by Brianna Bilter / North by Northwestern

On Monday evening at the Buffett Institute, Political Union debated whether Congress should pass the Green New Deal, a policy initiative alluding to FDR’s New Deal in the 1930s. After an end to over a month-long government shutdown, time and energy has shifted from the shutdown to policy initiatives both on the national stage and on the local stage in groups such as the Political Union.

Although a number of similar proposals have been made by economists, think tanks and politicians like Rep. Cory Booker, Alexandria Ocasio-Cortez has brought the motion back into the spotlight. The Green New Deal calls for the establishment of a “Select Committee” of 15 members to develop a tangible economic mobilization plan focused on de-carbonization, job creation and socioeconomic justice in its implementation.

“[The issue is] whether we’re going to address one of the most fundamental issues of our time,” Weinberg senior Edmund Bannister said, leading the debate in favor of the Green New Deal. “That issue is climate change.”

Bannister argued that the deal is not all that radical in light of the magnitude of the problem. Natural gas and oil are finite resources, and the U.S. economy must find a way to meet its energy needs without them. He highlighted the way the deal will also address severe underemployment and lagging wage growth in the U.S. with private-public partnerships, public investment and tax incentives.

Weinberg senior James Skala, leading the opposition, took issue with the arguably lofty goals that Ocasio-Cortez’s version of the deal outlines, namely the transition to 100 percent renewable energy and a federal jobs guarantee. He argued that the economic sectors that are most impacted by climate change are shrinking in the U.S., and that because future technological developments are unknown, U.S. dollars would be put to better use if invested in schools, hospitals and foreign aid.

As the necessity to address climate change in some form was not really contested, the debate focused on determining whether the Green New Deal is the most effective means of addressing the problem.

“It’s a wasteful bill,” Weinberg junior Dominic Bayer said, before the debate began. “The money that would be spent on the Green New Deal would be better spent if left in the private sector.”

Several students opposing the bill proposed that a carbon tax would be a more ideal way to incentivize the private sector to cut down on emissions and curtail the extent of government intervention.

Weinberg junior Jake Gordon claimed that the private sector is a more efficient apparatus than the public sector if it is responding to strong enough incentives.

Bannister countered with the argument that more investment is necessary, and that while the ideal Green New Deal may not be as sweeping as the one proposed by Ocasio-Cortez, the scale of the initiative requires substantial government backing.

Weinberg junior Josh Varcie, president of Political Union, also brought up the possibility that a carbon tax on its own may merely shift the cost burden onto consumers, without holding enterprises accountable.

The Green New Deal faced another strong critique in the debate for its lack of a concise policy framework. Unlike its predecessor, the Select Committee on Energy Independence and Global Warming, the Select Committee under Ocasio-Cortez’s has a mandate to develop a plan by Jan. 1, 2020. But, as of now, its goals are ambiguously defined.

“I think you can be anti-Green New Deal without being anti-government intervention,” Gordon said.

However, FDR’s New Deal was not a concrete policy proposal either, as Bannister pointed out. Rather, it spurred the creation of other agencies and programs for a multifaceted approach. The Tennessee Valley Authority is one such agency, and it continues to function today.

Although the majority of students abstained in the initial vote, Political Union approved the motion to pass the Green New Deal by the end of the debate.

Weinberg sophomore Molly Molloy acknowledged the broader implications of this discussion concerning the extent to which the government should be involved in our lives.

“Most people came to a consensus that if we feel properly threatened, it is the government’s role to step in,” Molloy said.