When President Trump announced the U.S. would recognize Jerusalem as the capital of Israel, some were upset, some were relieved and many were confused. Thursday evening, a small group gathered in the basement of Harris Hall to hear two experts give their perspectives on Trump’s move and how to achieve peace in Israel and Palestine.

The event was hosted by the Northwestern chapter of the Alexander Hamilton Society, an organization which sponsors debates on issues of economy, foreign policy and national security.

“We try [to] represent both sides so that there is that competition of ideas and debate which opens a dialogue which might not otherwise exist,” said Medill sophomore Dylan Gresik, president of the Hamilton Society.

The featured speaker, Michael Singh, is the Lane-Swig Senior Fellow and Managing Director at The Washington Institute and a former senior director for Middle East affairs at the National Security Council. Singh debated with Daniel Kamin, adjunct professor of International Studies at DePaul University, over the decision to move the embassy and how it may affect peace in the region. 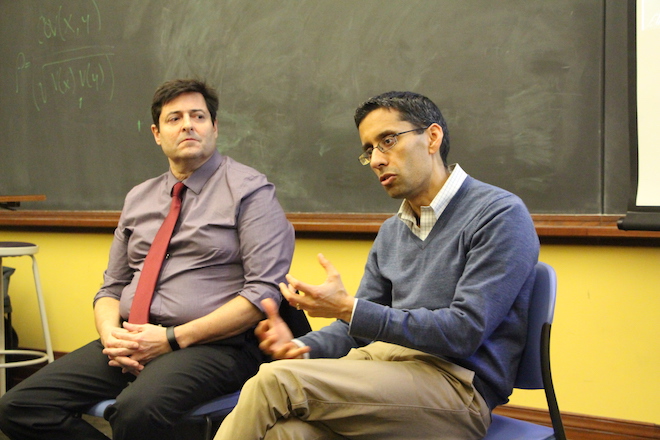 Kamin and Singh offer their thoughts on Trump's divisive Israel move during a debate in Harris Hall on Jan. 25.

In early December, Trump recognized Jerusalem as the capital and ordered the embassy to move there from Tel Aviv. This week, Vice President Mike Pence told the Israeli parliament the switch would be completed in 2019.

This move is seen as a break from decades of U.S. foreign policy and that of other Western powers, who see the recognition as a final status issue to be solved in negotiation talks. Although both Kamin and Singh claim that Jerusalem already acts as the Israeli capital, claims to specific areas of the city remain ambiguous.

According to Singh, the largest consideration for peacemaking now is not whether Jerusalem can be rightly named Israel’s capital, but rather how to bring both Israelis and Palestinians to engage in concrete discussions about the nuances of such territorial decisions.

“By the U.S. coming in and setting the parameters for the discussion, the Trump administration may feel that it has eased the negotiations,” Singh said. “The problem with that is, of course, there is no negotiation table. You have to get to the table before you can talk about the dynamics of the negotiations themselves.”

Kamin, on the other hand, is less certain that both parties are willing and able to engage in such discussions.

“I’m a bit more cynical than Michael expressed here,” Kamin said. “You have a right-wing government in Israel ... There’s a lot of legitimate questions about whether this government can come out in support of a two-state solution.”

Regardless of how Israelis, Palestinians and the U.S. approach the future of Israel and Palestine, Singh stressed the importance of negotiation between the parties, especially given the issue of mistrust.

“A lot of the problem now is not so much that there aren’t ideas about how to resolve these issues, it’s that the two sides don’t trust each other, the public is increasingly of the mind that these solutions just aren’t feasible,” Singh said. “So there’s despair, really. And combatting that has to be a priority for anybody that thinks this is important to solve."