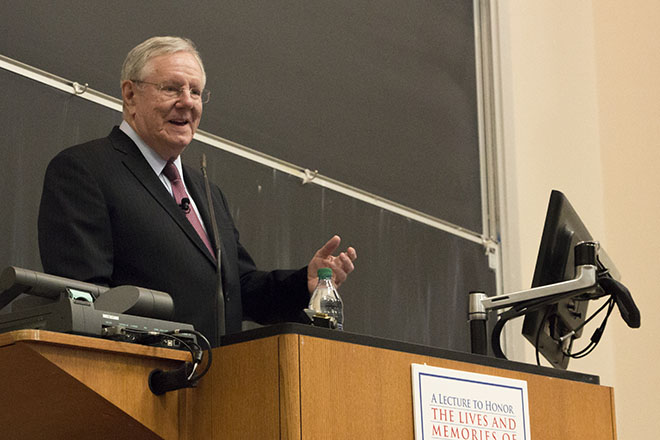 For their last event of Fall Quarter, College Republicans hosted Steve Forbes, chairman and editor-in-chief of Forbes Media. Forbes gave a talk focused on taxes and healthcare, two hot-button issues discussed in the political sphere that have been at the top of the agenda since President Trump took office in January.

Around 70 audience members from Northwestern and Evanston community attended the event in Fisk Hall. Forbes, who ran for president in both 1996 and 2000 advocating for a flat tax and various institutional reforms, continues to promote these principles today.

Forbes prefaced his policy arguments by stating that a booming economy leads to political productivity, and that booming economies rely on unfettered human ingenuity.

“The key is having an environment where knowledge can be created, where things can be learned,” Forbes said.

Forbes took the common conservative position that government regulations muddy the waters of the environment for innovation. In terms of tax reform, he said that the current system is overcomplicated, leading to wasted time and money, thereby reducing the capacity for growth in the market.

In an open letter to President Trump, Forbes described the new Republican tax bill as antithetical to the goal of true tax cuts because it does not support households and small businesses.

“The way the tax bill is structured right now, it’s probably not going to help me out that much,” Rick Pritikin, a small business owner and audience member said. “But we’ll take what we can get for now.”

Forbes claims that tax cuts, such as those implemented by Presidents John F. Kennedy and Ronald Reagan, allow for the growth of business by giving people an “instant raise” and therefore more purchasing parity.

Forbes also cited weak leadership by Congressional Republicans as the reason for their compliance with the Congressional Budget Office and their failure to stick to simple, broad slashes. Instead, he advocates for an overhaul of the tax code that is comprised of a flat tax and a low rate for businesses.

“I thought they [Republicans] won the election, not Hillary,” Forbes said. Republicans should “just do it.”

On the subject of healthcare, Forbes said the national “crisis” of demand is caused by over-regulated markets, which hinder productivity. These markets rely on large corporations such as insurance or pharmaceutical companies that take away consumers' power and lead to a lack of transparency and poor services, Forbes said.

“[We need] real entrepreneurship, finding ways to make things less costly for you, and making more breakthroughs for you, with an effective safety net, so when something bad happens you know you are covered,” Forbes said.