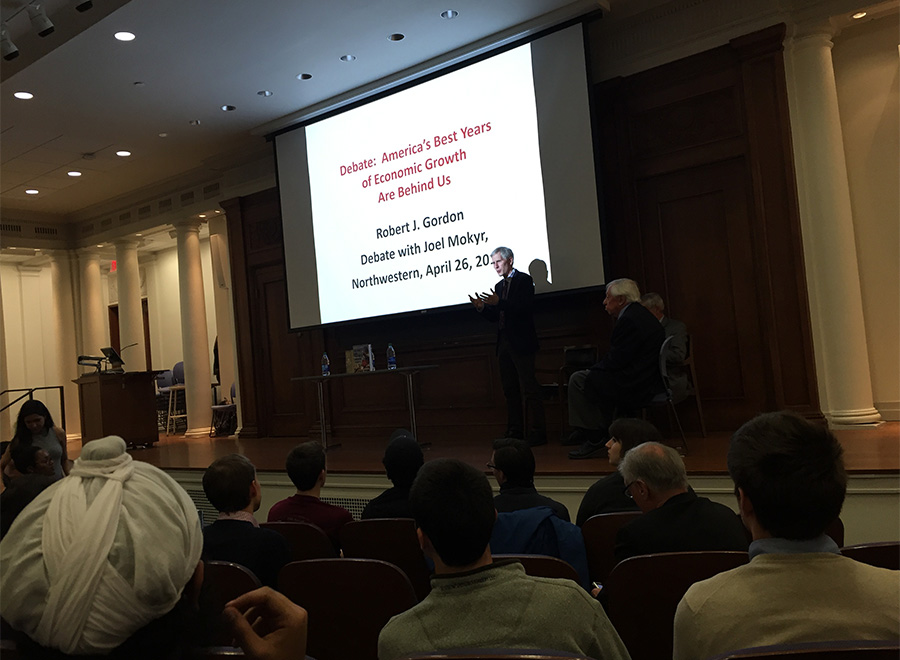 A stagnant gross domestic product (GDP) could mean years of job loss and income inequality for America. On the other hand, new technology could save the U.S. economy. The two professors debated which of these realities might come true. Earlier this year, Gordon wrote a book on the subject, arguing that economic growth will be harder to achieve in the future. Mokyr has been one of the biggest critics of Gordon's theory. The debate was moderated by economics professor Mark Witte.

Gordon began the debate by using statistics to show that the American GDP’s growth has been slowing down for the past couple of decades and that the technological and business revolution has ended by 2005.

“Everywhere I look, I see things standing still. I see offices using desktop computers and software much as they did 10 or 15 years ago,” Gordon said. Gordon pointed to this as evidence that the era of technological innovation and economic growth has ended.

Gordon also attributed some of the economic slowdown to what he referred to as headwinds. These headwinds included the slowdown in the rates of the completion of college, economic inequality, the retirement of the baby boomer generation and the decline in marriage. Gordon said these headwinds are “darkening the outlook for economic outlook in the future.”

Mokyr’s approached the situation more optimistically. Mokry believes that technology can still be innovative and that these innovations can save the economy. One of Mokyr’s slides described his view of the future of technology as “You ain’t seen nothing yet.”

“The tools and instruments we have today make anything that we had in 1700 or 1950 look like clumsy toys by comparison,” Mokyr said.

Students in attendance had varying reactions to the debate, and felt that the discussion was relevant to their own futures. Medill freshman Benjamin Trachtenberg agreed with Mokyr’s optimistic view of the future.

“I believe that this is the greatest time to be alive and it’s getting better everyday. We definitely have a lot of challenges ahead, but I think we can rise above them,” Trachtenberg said.

Weinberg junior Aaron Davila, while not necessarily agreeing with Gordon, felt that he performed better.

“Gordon just focused on actual statistics, and then Mokyr called everything that he was doing extrapolation and that his prediction wasn’t useful. But then Mokyr gave himself more of an aimless projection of the future.”

Weinberg freshman Pranav Dhingra thought that the two professors views were not incompatible. “If Professor Gordon is limiting his position to the next 25 years and professor Mokyr is essentially saying it takes more than 35 years for innovation then I don’t see what the problem is because neither of them is really disagreeing with the other.”