NTW Non-Tenure Eligible Faculty Union (NU NTE Faculty Union) and students gathered at The Rock this afternoon, demanding that President Morton Schapiro negotiate with the Faculty Union. The rally, held as part of the National Campus Equity Week, drew a crowd of over 60.

Protesters held posters with slogans such as “Unmasking the Rigged Economy on Campus” and “Justice for Students Affordable, Quality Education." Some supporters also wrote their own signs, expressing “Solidarity with Faculty” and “NU Grad Workers Support NU Non-Tenured Faculty Right to Bargain”. 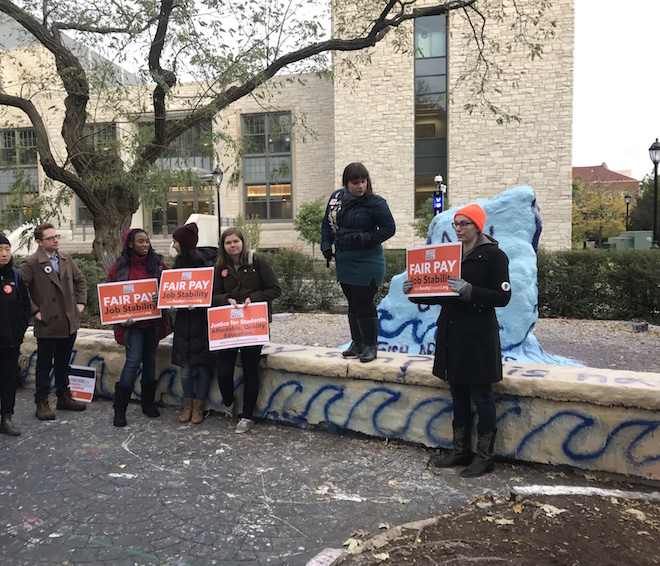 Non-tenure faculty at Northwestern have formed a union that is not recognized by the University. The purpose of the rally was to raise awareness and pressure the University to the negotiating table, according to Aaron Norton, a visiting assistant professor in Gender & Sexuality Studies and Sociology at Northwestern. The labor union's main goal is to secure longer contract appointments for those with temporary positions, as well as equity in pay between departments and genders.

Paige Warren, an adjunct faculty member at Loyola University, was the first to speak at the rally. The Loyola faculty won their right to unionize in January 2016, but the University “has not been bargaining in good faith,” says Warren. According to Warren, the University is aware of the power held by students, and believes that it can hold professors to unfair bargaining practices as long as students are unaware.

“We can’t be the kind of educators that you have earned and deserved, and that we want to be," Warren said. "We are teachers because we love you students, but we should not have to take a vow of poverty to be able to do that."

Warren also called students to action, seeking to garner their support for their professors.

Seri Lee, a representative from APAC, said that five out of eight professors in the Asian American Studies program at Northwestern are not on the tenure track.

"Our faculty take up the emotional labor, providing not only mentorship but also support for students of color and other marginalized groups whom the university otherwise neglects," Lee said.

“What we hope to get out the event is that the University will change its position and sit down to the negotiating table with us,” said Norton.