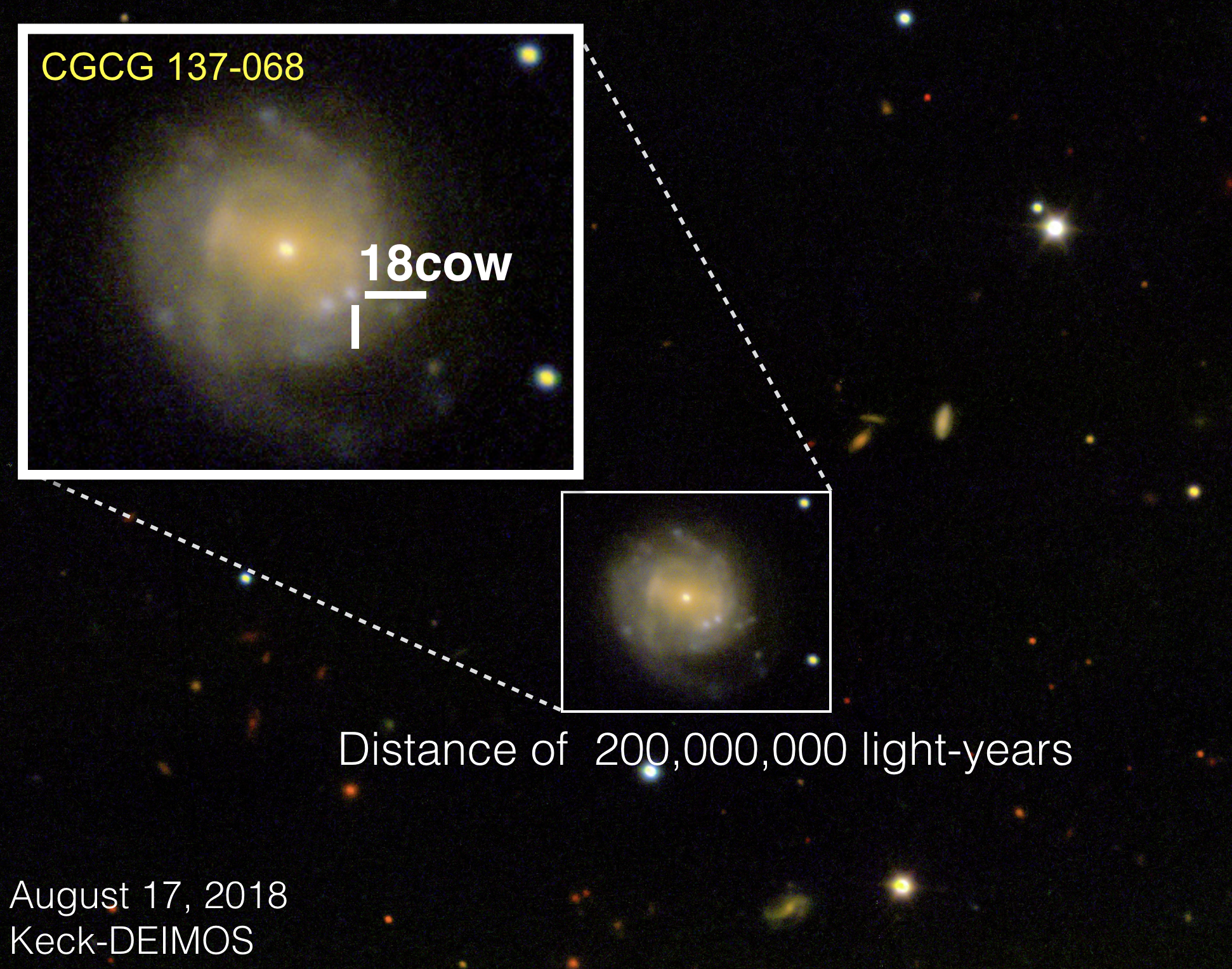 AT2018cow, or "The Cow," is thought to have been the birth of a neutron star or black hole.

When Weinberg sophomore Daniel Brethauer began research with Professor Raffaella Margutti last year, he initially expected to be making coffee. But he never could have anticipated what happened last summer.

“One day [Margutti] said, ‘I’m sorry, I’m really tired. I had been staying up super late. There’s something that just happened last night, and it’s super cool, and nobody knows what it is,’” Brethauer said.

Margutti was talking about astronomical transient AT2018cow, referred to as “The Cow” for short. Astronomical transients appear in the sky and stay there relatively briefly, then disappear forever. Astronomers observed The Cow last summer as a light in the Hercules constellation, 200 million light years away, but it soon disappeared.

“When we realized that there was something very interesting in the sky, we started contacting our friends, theorists, and our friends with access to other observational facilities,” Margutti said. “It took the whole summer and literally 45 people thinking about it, trying very different paths.”

Margutti led an international team of researchers in a study of this event. They concluded that the bright light of The Cow was likely the moment a star collapsed, forming either a black hole or neutron star.

“If we are right and this is literally the birth of a black hole or neutron star that we could see in real time, this gives us a new window of investigation on this type of object that we didn’t have before,” Margutti said.

Scientists already understood the process that creates a neutron star or a black hole, but no one had ever before observed it from beginning to end. When the researchers observed The Cow, it was an astronomical first.

When a very massive star “dies,” it collapses, causing a big explosion called a supernova. What’s left behind is a type of compact object – either a neutron star or a black hole. A neutron star is an extremely dense star made primarily of – you guessed it – neutrons. These are small in diameter (about the size of a big city) but very massive. If you were to fill a teaspoon with neutron star material, it would weigh about 10 million tons. A black hole is another extremely massive object which has so much gravity that not even light can escape. The Cow is believed to have been the birth of one of these compact objects.

Overall, the research included 45 scientists from the United States, Chile, Europe, Canada and South Africa. Margutti was the lead researcher on the project, but she had a team at Northwestern working with her – post-doctoral students Kate Alexander, Deanne Coppejans and Giacomo Terreran, graduate student Aprajita Hajela and undergraduate Brethauer, who began to research with Margutti when he was a first-year student.

“We didn’t know what we had in our hands at first,” Terreran said. “Every day, something new came out. One day was one thing, the day after was another thing, and so that was really cool trying to always chase the right, final understanding of this object.”

Before arriving at their conclusion, the researchers comprehensively viewed The Cow through different wavelengths of light across the electromagnetic spectrum, from gamma rays to radio waves.

Though transients such as The Cow happen often, there were a couple of specific things that made The Cow easier to observe than others. First, it was identified early on, allowing researchers across the planet to observe it quickly. It was also relatively close to Earth, so it could be seen in greater detail.

Still, it wasn’t easy to determine what The Cow was. Before coming up with their final theory, the researchers pursued multiple ideas that looked at first to be plausible, but didn’t fit with all the data.

“The most difficult, difficult but beautiful, was this continued going back and forth. We do two steps ahead and one back,” Margutti said. “Yeah, it is difficult, but that is what made it exciting.”

Brethauer said that his research experience as an undergraduate student exceeded his expectations.

“When the paper itself became published and I saw my name on there, that was absolutely incredible. I never expected to be a co-author on a paper my first year,” Brethauer said. “I am so appreciative that [Margutti] took the chance with me to take me into her group for this opportunity.”

Brethauer plans to continue researching with Margutti and hopes to intern at NASA this summer.

For Margutti, leading the research was an incredible experience.

“This is really a team effort, so it is literally 45 scientists are getting together and trying to explain something we have never seen,” Margutti said. “It was a wonderful experience for me to lead this team – the best experience of my work life.”