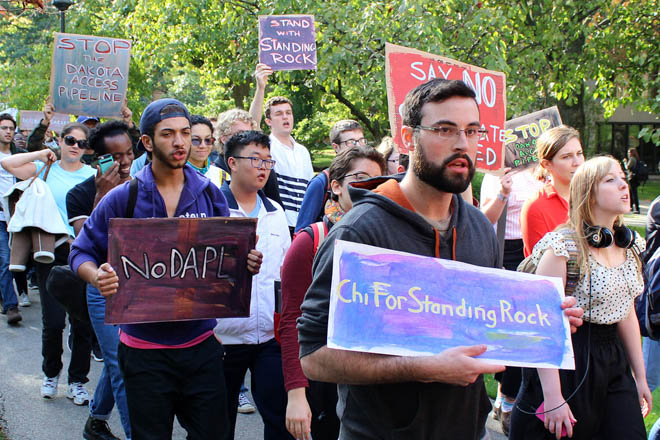 Protesters march toward Lake Michigan as part of an Indigenous People's Day rally against the Dakota Access pipeline. Fossil Free NU and the Native American and Indigenous Student Alliance co-organized the event.

From Annenberg to the Arch, the campus echoed on Monday afternoon with voices of almost 100 students, faculty and community members marching from the Rock to Norris.

The sign-toting protestors came to the Rock in recognition of both Indigenous Peoples’ Day (the increasingly popular alternative to Columbus Day, and official holiday in Evanston) and of a major issue facing many Native American communities today: the currently in-progress Dakota Access Pipeline Project (DAPL). The Pipeline when completed will bring domestically produced crude oil from North Dakota to Illinois.

The project has gained national attention, particularly from the Standing Rock Sioux Reservation, comprised of the Hunkpapa Lakota and Yanktonai Dakota Peoples, whose fresh water from the Missouri River will be in danger of pollution following the pipeline’s implementation.

Since the beginning of September, protests started by Lakota and Dakota organizers have gained traction nationwide, and have gained support from celebrities (most recently, actress Shailene Woodley was arrested at an NAPL rally on Indigenous Peoples’ Day), and on Monday, Northwestern students joined these growing ranks.

27 arrests today, 2 of those who were locked to machinery are being charged with felonies #NoDAPLhttps://t.co/VABrgDkQ9Q

Al Eastman, an organizer for Chicago in Solidarity with Standing Rock, came to the Northwestern noDAPL rally to share his thoughts on the pipeline.

“This pipeline will destroy our water for many generations,” said Eastman. “This black snake is being forced upon the people by eminent domain. Generations of people that have fought long and hard for their land, for the future generations.”

Eastman pushed attendees to “come together, to call your politicians.”

Weinberg sophomore Moriah Lavey, a member of the Executive Board at Fossil Free NU was one student who came to support the cause. Lavey said she thinks it is Northwestern’s duty to help spread awareness about the pipeline, and the rally was a good first step.

“It was really cool seeing a bunch of different members of the community coming out,” said Lavey. “I thought it was really powerful to get so many different types of people together.”

The president of the Native American and Indigenous Student Alliance, Medill senior Lorenzo Gudino, who started the “Water is Life” chant, spoke at the rally. He urged people to continue thinking about NAPL’s implications after leaving.

“When you go home today, and you’re able to drink your water, remember that there’s people who can’t,” Gudino said. “And if this access pipeline is put up, these people will not be able to drink either.”