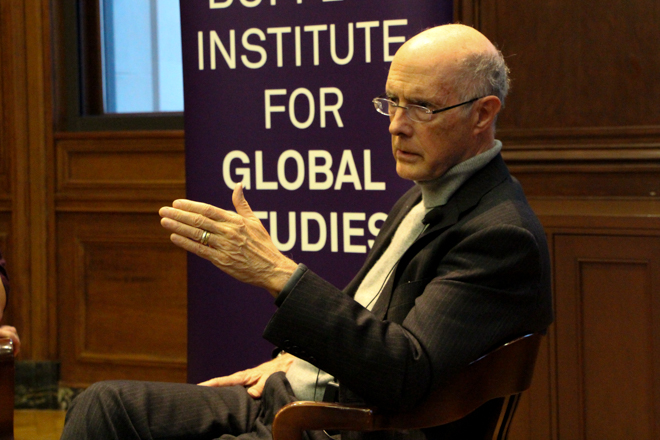 To all the sad Medill students living in fear of joblessness and fake news (don’t worry, we’ve all been there): Former journalist Strobe Talbott gave some hope to the crowd in Harris Hall during North by Northwestern's first-ever "NBN Live" conversation Tuesday, hosted in collaboration with the Buffett Institute.

“Your generation is going to have an opportunity to take journalism – and by journalism I mean good, responsible, respectable journalism – into new technologies," Talbott said, "and find a way to bring back in the quality control, fact checking and treating journalism as something more than a business." Talbott knows what he’s talking about, to say the least. His career includes 21 years at TIME magazine, where he covered foreign affairs and international relations. His expertise – and his experience as Bill Clinton’s roommate during their time studying at Oxford – led him to the state department in the early '90s, where he served as deputy secretary of state for seven years.

His second of three visits to campus comes six months after the end of his term as president of the Brookings Institution, and one month after the Meredith Corporation announced that it will sell TIME along with other TIME Inc. titles Sports Illustrated, Fortune andMoney. Media industry buzz has declared the sale another shot to the heart of journalism as we know it.

Talbott agreed that the blow to TIME might be a fatal one, and further, that the era of fake news and alternative facts is dragging us down.

“If there were a stock market for democracy and a competing company called authoritarianism, the latter would be doing very well and a lot of people would be selling stock in democracy,” Talbott said.

But Talbott also said the “new kind of excitement about journalism as a career” bolsters his hope for the future. The '70s and the '80s, when Talbott was coming up in the journalism world, were shot through with doubt about the future of journalism, just like today. But through all the disruptions caused by new technologies, Talbott stuck with it – and he thinks we should, too.

“All of [my colleagues], including their corporate masters considered, while these are profit making companies, they’re also a public trust,” Talbott said. “If you folks as you go forward can elaborate on that and kind of anchor … that will be hugely important, not only for your own lives, but for the health of our politics.”

If we can apply this kind of gold standard to 21st-century technologies, Talbott said, we just might make it.

“I would without shame confess to being an optimist,” Talbott said. “Little by little, with obviously setbacks and mistakes and follies, we the human race, are going to not just make it, but make it better.”