In an array of bright pinks, blues and greens, Deeva Dance Troupe members command the attention of their audience, transitioning from a traditional Bhangra routine to Bollywood to ballet. Audience members are transfixed, but one thing stands out to them in particular: Most of the dancers are white.

If you attend an event or show at Northwestern led by a cultural student group, you may be surprised to see a large population of members who do not match the identity described in the organization’s title.

Deeva Dance Troupe has 15 members, only four of whom are Indian or Indian-American. Weinberg junior Hannah Beswick-Hale said that this has not always been the case. She’s been on the team for three years and is one of the co-captains.

“If you go back in the archives of Deeva, it was almost exclusively Indian,” Beswick-Hale said, remembering when she was one of the only white women on the team her freshman year. “When I joined it was probably two-thirds Indian students, mostly Indian-Americans. As I’ve been on the team, it has gotten progressively less Indian.” 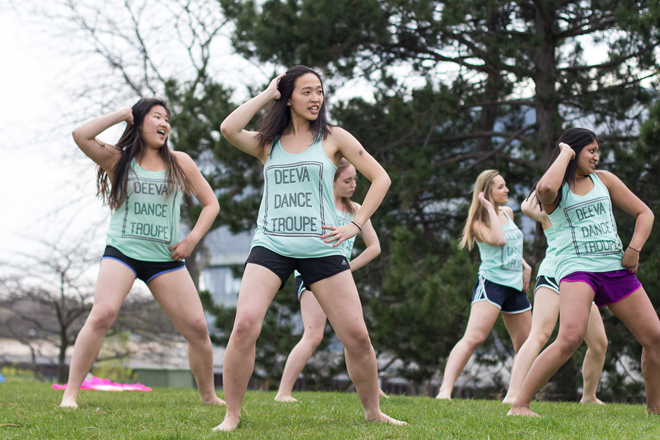 Deeva is not the only group to grow more accommodating to students with an interest in learning about a culture. Other cultural arts organizations such as a capella groups have broadened their diversity and established initiatives to include students with different backgrounds.

Grady Jensen, a freshman in the School of Communication, is an outlier within his Jewish a capella group, ShireiNU. Though the group has moved to include members from the non-Jewish community, only 12 of the 17 singers are Jewish and all are white.

However, even having five members who are outside ShireiNU’s main cultural group is a big change.

“ShireiNU used to be very, 100 percent Jewish,” Jensen said. “They did a lot more for Hillel and sang more traditional Jewish music. As time has gone on, we’ve moved away from that and we do a lot more pop music. Even the music that we do sing now that’s in Hebrew is all Israeli pop.”

Transitioning cultural groups into educational spaces has permeated the practices of creating new clubs as well.

The Vietnamese Student Association was founded just last year; its goal has always been to include anyone who wants to “promote awareness of and appreciation for Vietnamese and Vietnamese-American culture,” and its Facebook page reminds people that they do NOT have to be Vietnamese to join.

This has been taken seriously by many students within the VSA. SESP junior Stacey Huynh, the club’s president and a founding member, is the only Vietnamese student on the executive board.

“Vietnamese students are a minority in the group, to be honest,” Huynh said. Of their approximately 20 members, only three or four have a Vietnamese background.

Huynh attributes this to her guess that there are not many Vietnamese students on campus. She says she has tried looking for them, but it’s hard to determine who identifies as what. VSA’s outreach tactics have largely failed to attract Vietnamese students.

David Bender, the University enrollment business administrator, said Northwestern doesn’t publish data about which countries students are from, but the school is almost 18 percent Asian.

While the demographics of the club are not necessarily a problem, Huynh said she sometimes wishes that the group was more aligned with her culture. “There wouldn’t be as much of that need to educate people,” she said. “I think the main reason why not too many Vietnamese people join is because the club is just so diverse that those that want to find place for just Vietnamese people [can’t do that] in our club.”

Weinberg sophomore Austin Chambers loves Japanese culture, and is a part of Japan Club, a group of about 20 students who, with the exception of one, are non-Japanese. He joined the club his freshman year because it was one of the few ethnic organizations he looked into where he didn’t feel like he stuck out as a black student.

“Everyone else in the club was in the same boat as me because they weren’t Japanese,” Chambers said.

Both Huynh and Chambers said they feel that certain other cultural groups on campus are much more stringent in who they include; they would be seen as outsiders if they joined the groups of different cultures. This makes them value their diverse clubs more.

In groups like VSA where there is a Vietnamese member in the executive board who feels comfortable leading meetings and promoting education within the club, it’s not a problem to avoid appropriating a tradition. However, in a group like Japan Club, where the president is a black American, or in Deeva, where the co-heads are white Americans, this can be more challenging.

Chambers doesn’t worry about misrepresenting Japanese culture because, in general, he said, they don’t represent it at all. “We mostly just sell food,” said Chambers. “I hope that doesn’t offend people!”

When he does plan a more traditional event like a cultural workshop, it is with the help of his half-Japanese roommate.

However, Beswick-Hale says that being taken the wrong way is one of her biggest fears, so she goes to great lengths to get feedback from groups more committed to preserving traditional styles of Indian dance.

“This campus is really sensitive,” she said. “I’m terrified of accidentally culturally appropriating anything… like, I’m absolutely terrified I’m going to come off as some random white girl who thinks she can run a Bhangra routine or something. We try really hard to be sensitive to that and ask for help and get feedback.”

Other groups seem happy to help Deeva, and are excited that the women want to learn their style.

Sandeep Bharadwaj is a Weinberg junior who dances for Raas, a traditional Indian dance group. He said he only sees Deeva as a positive thing, he thinks other members of his group feel the same.

“We all know we’re not going to school in India,” said Bharadwaj. “I appreciate all the different cultures we’re exposed to at Northwestern. I think it’s nice that Deeva incorporates so many different types of dance. And the fact that we have that group is good, and it’s also good that we have clubs like Bhangra and Raas.”

Stacy Tsai, a Weinberg sophomore and the external president of the Asian Pacific American Coalition (APAC), said she has some problems with student groups that shift too far from the culture they are meant to represent because minorities may feel they have no place to go.

“It’s not entirely unproblematic,” said Tsai. “I think that one of the purposes of cultural groups on campus like Japan Club or VSA or even Deeva is so that people of a certain ethnicity feel comfortable on campus and part of that is because of the cultivation of an environment where people have similar experiences to you.”

Jane Shi, a School of Communication sophomore and member of a number of Asian interest groups including Typhoon Dance Troupe and the Midwest Asian American Students Union, said she thinks that there is a fine line between cultural appropriation and appreciation.

“I think the line lies at your attitude,” Shi said. “If it’s about glorifying [yourself], that’s appropriation. [Appreciation] is more respecting the culture, and actually being interested in learning about it. For Deeva, they put so much effort into appreciating India’s dance, I think that’s a lot of work and respect that they pay to the culture.”

At the same time, Tsai and Shi don’t see the presence of white students in a cultural club as something that eliminates its worthiness.

Shi believes it would be hypocritical for a minority club to advocate for cultural and racial equality and then not include other races.

“People often think of cultural appropriation as a blockade for cultural mixing, which it’s not. Nobody is trying to separate cultures,” Tsai said. “As long as [groups] don’t absorb an art form and market it as their own, I don’t think it’s a problem for white people to try to experience and learn about a culture.”

When it comes down to it, though, groups like Deeva and ShireiNU have transitioned away from their “traditional” foundings.

Shi says this is not at all about a disconnection or waning respect for the cultures represented by groups; rather, it comes from a need to fit in and a lack of opportunity, resources, help and population.

“I feel like the Asian community or the minority community is really struggling through blending into the whole population at Northwestern,” said Shi. “If you want to get enough members to come to your event, if you want to have more publicity and appreciation, you might need to fit into the more generally accepted overall image of American ‘popular culture.’”

Jensen sees the transition as a result of trying to better connect with the broader Northwestern community.

“We want to become a bigger voice in the a capella community and become a better group and serve more gigs,” he said. “We are moving more toward serving the greater Northwestern community.”