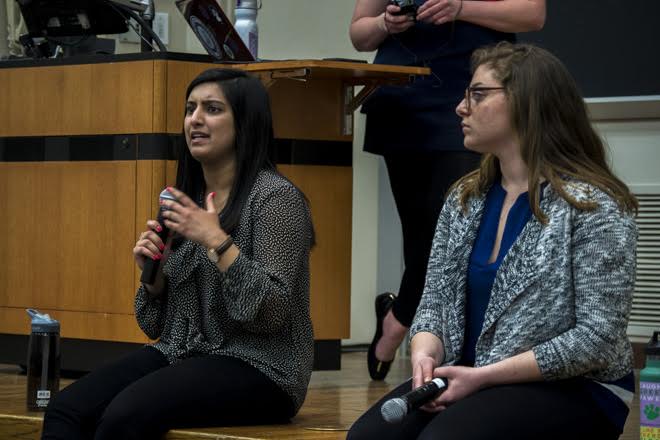 In case the Facebook posts have not tipped you off, ASG’s presidential elections are today. ASG is the official student government for the undergraduate student body, and they work on students' behalf to make improvements to the university. However, if you’re like many Northwestern students, your understanding of how ASG can impact the student body is about the same as your understanding of last week’s history readings you didn’t do in time for discussion.

Some students feel that they have little to no interaction with ASG, and others feel that ASG has much left to accomplish on behalf of the student body. However, both this year and in past years, ASG has also already made some significant, tangible changes to the way that students live their everyday lives on campus. And while neither ASG presidential candidate promises to make Evanston pay for a wall around Northwestern (thankfully), tonight’s election can lead to serious changes for student life.

Many Northwestern students cannot remember a time when they had an interaction with ASG, and others can only recall one or two times ASG had an impact on their lives.

“My only interactions with ASG was when the President addressed us at the Wildcat Welcome pep rally and when two candidates came to my sorority house to give a campaign speech,” Medill freshman Sidney Thomas said.

Still, there are many ways that ASG can impact students' lives. Some initiatives students are very familiar, with while others are less well known.

For example, in order to address the issue of mental health on campus, ASG created an initiative called “Take Time.” The initiative encourages students to focus on their well-being and take breaks from studying. Sophomore Simran Chadha, the chief of staff of ASG, found the measure to be a telling example of ASG's impact on campus.

“I think this is something small that we’re doing now that can have a big impact down the line, because the point is to really integrate it into Northwestern culture,” she said.

In other initiatives to address mental health, ASG made use of their specific Senate committies that work to help the student body. The push to release the limits on 12 sessions at CAPS came from the academic and student life committees. These committees also worked with CAPS to help students get academic accommodations when they had physical health needs, such as a concussion or mono.

ASG has also had success getting the administration to listen to students’ desires. In 2006, ASG successfully convinced administrators to require professors to post CTEC comments. ASG also supported the successful movement to create an Asian Studies major this year.

However, some Northwestern students believe ASG fails to represent them.

“The only reason why I didn’t have the greatest experience at an ASG meeting is because there needs to be a more diverse Senate," School of Communication freshman Danielle Douge said. "There needs to be a Senate that knows the issues of more than just a white male student.”

Former ASG senator Kevin Luong noted that while ASG is necessary, there are roadblocks for some students to become members.

Luong also stated that the bureaucratic nature of ASG is not the best place for students who demand immediate action.

“When there’s something that’s time sensitive or something that has a certain amount of resistance from the campus, then it is sometimes not the best way to approach it from ASG,” Luong said.

Members of ASG acknowledge that representation is an issue that needs to be addressed in its organization.

“One of the things we could do better is representation in Senate," Senate Speaker Nehaarika Mulukutla said. "Right now I’m on the ad hoc committee to reform the Senate. We're thinking about how ASG is structured and how it goes through election cycles so that we can ensure that there’s better representation across campus.”

While Mulukutla admits that they could do better, she feels that everybody with whom she works with strives to improve representation, and that both executive campaigns currently running for election seek to work on this issue.

"The ASG has failed students on this campus, and marginalized students are disproportionately affected," executive vice presidential candidate Macs Vinson said during a debate earlier this week. "We are doing work to rectify what ASG has failed on. Our platform is by no means finished, and you can edit it, change it and add to it."

“ASG isn’t helping students putting hours of effort into issues they are passionate about," Syed said. "There are so many students pursuing support and the ASG has not been there for students."

Students may be uninterested in a presidential campaign where the candidates forget to brag about their anatomy, but election commission head Lauren Thomas feels that ASG is still the best way to enact change.

“If you feel your voice hasn’t been represented in ASG before and you think one team will do a better job, then I would encourage you to vote,” Thomas said.

Students can vote for the ASG President online this Thursday starting at 5 p.m. through Wildcat Connection. The candidates and ASG senators hope that the election process can make ASG great again in the eyes of students.