Lacrosse battle tested going into NCAA Tournament
By Will Fischer
8:45 p.m. May 12 2016 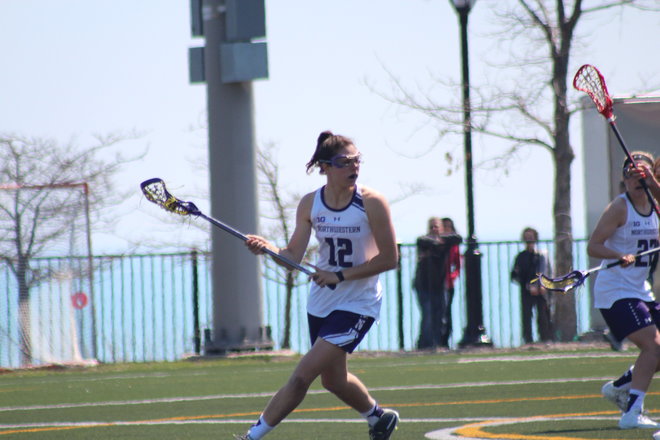 Senior attacker Kaleigh Craig has a team-high 49 goals and is ready to lead the Wildcats into the NCAA Tournament.

Nine losses. It’s the most Northwestern has had in a season since head coach Kelly Amonte Hiller first took over in 2002. It’s more than the Wildcats had combined in their seven NCAA Championship seasons between 2005 and 2012.

But those losses might not be as bad as you think.

“Losses and setbacks make you grow,” Hiller said. “They force you to look at yourself, they force you to get better and I think that more than anything, that was the benefit of having those setbacks and having such a rigorous schedule - where every week we’re playing at a minimum, two tough teams.”

The rigorous schedule has certainly weighed on the ‘Cats, and it shows in their 10-9 record. Northwestern women’s lacrosse simply isn’t used to losing this much. But through adversity, senior attacker Kaleigh Craig said her team has gotten stronger.

“I think it makes us a little more resilient,” Craig said. “We’ve seen everything, experienced any kind of up-and-down we could’ve and I think that’s super important going into the end of the season.”

Now, the Wildcats will have a chance to show that they’ve learned from those failures. NU will travel to South Bend, Indiana to play No. 9 Louisville on Friday in the opening round of the NCAA Tournament - and the ‘Cats will be looking for revenge.

Back on March 3, Louisville handed NU one of its worst losses of the season, locking down the Wildcat offense en route to a 10-4 victory. But senior defender Spring Sanders said NU will be ready to avenge that defeat.

“I think it just gives you a good confidence boost, it makes you hungry,” Sanders said. “Another opportunity to play a team, we’ve got some unfinished business with a couple teams and it’s really awesome to have another chance.”

For many teams, the NCAA Tournament is a step up from the level of competition faced during the regular season. But not for NU - of the 17 teams NU played this season, 11 of them will be in the NCAA Tournament. The ‘Cats have been challenged by the top teams in the country, forced to confront their weaknesses and prove that they have grown and improved from it.

For example, the Wildcats were absolutely trounced by undefeated No. 1 Maryland 17-4 on March 31 - they were in a different league. But in the Big Ten Championship game against a still undefeated Maryland this past Sunday, NU had the score tied 6-6 at half before losing a much more competitive 12-9 contest.

“You know what it feels like to have your back up against the ropes and we’ve been there several times,” Sanders said. “We’ve shown what we can do under pressure and now it’s just time to go out there and perform and do what we know we can do.”

Northwestern has learned from its mistakes and is ready to leave those nine losses behind. After all, the Wildcats will get a fresh start in the NCAA Tournament - and they believe the sky is the limit.