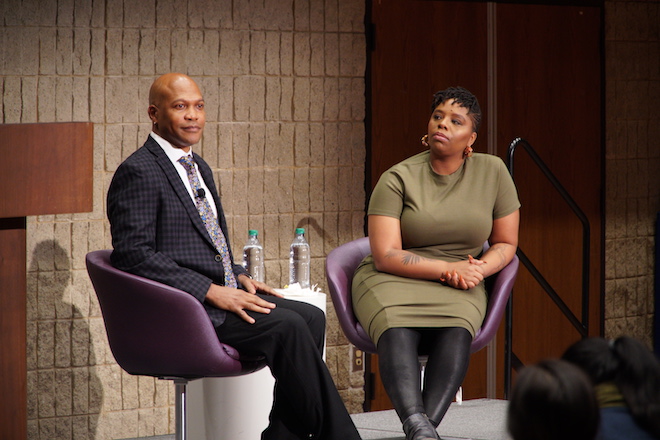 Activist and artist Patrisse Cullors discussed her art, the history of #BlackLivesMatter and the evolution of activism in a dialogue Thursday evening.

The event - which was reportedly sold out - was the winter installment of a yearlong dialogue series sponsored by the Kaplan Institute of Humanities. Cullors was interviewed by E. Patrick Johnson, the head of Northwestern’s African-American studies department, on her experiences as both an advocate and a creator.

Cullors, who is currently pursuing an MFA at the University of Southern California, said her activism is shaped by her art, and vice-versa.

“Art is digested in a way that really offers people [the ability] to feel deeply,“ Cullors said. “It gives the opportunity to heal from something that may have traumatized an individual or an entire community.”

While Cullors has produced several performance art pieces and a bestselling book, her most well-known achievement is laying the groundwork for the internationally-recognized #BlackLivesMatter movement. She, alongside co-founders Alicia Garza and Opal Tometi, spent over a year cultivating a network for the movement before it went viral. But Cullors explained that once #BlackLivesMatter hit the mainstream, the three struggled to combat appropriarion and misrepresentation of their original message.

“As often happens with black women’s work, credit was taken away from us,” she said. “People were saying that it just popped up on social media and gained traction, when we had been deliberately laying the groundwork of it long before any of this.”

Cullors also recounted that the founders, who are all black women, were disheartened when the movement was misinterpreted to exclude women.

“It became that when people read “Black Lives Matter,’ they understood it as ‘Black Men’s Lives Matter.’” Cullors said. “The media swore that’s what it was. [The movement] was only getting coverage in the context of men.”

Her comments regarding the treatment of black women struck a chord with some attendees, many of whom were undergraduate students. During the question and answer period, Northwestern students expressed frustration with the university’s decision to sponsor the talk in light of recent events. Tensions have been high regarding the presence of controversial psychologist and researcher Dr. Satoshi Kanazawa, who has written articles insulting black women. Some students found it hypocritical to hold the event at this time.

“The university does this thing where they’ll portray an image of being pro-change or pro-activism, but then at the same time ignore students who try to make a change at the university,” Medill sophomore Arudi Masinjila said. “It’s typical of them to have this event while there’s still all of this going on that is unresolved.”

In a question to Cullors, one attendee referred to the animosity between students and provost Jonathan Holloway as a “battle with the black elite.”

In response to these concerns, Cullors emphasized the importance of relying on community and praised the resilience of campus activists.

“It’s difficult to have to contend with feeling unsupported at a predominately white institution,” Cullors said. “But you’re surviving, you’re alive and you’re here. And that’s amazing.”

The next installment of the Kaplan lecture series will take place on April 8.