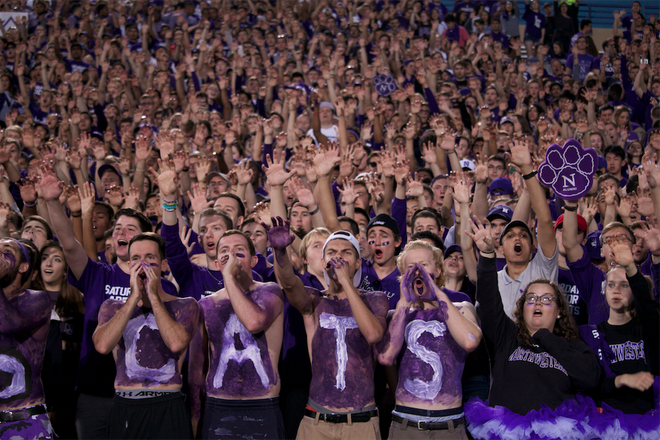 Northwestern fans are happy after two big road wins, and they should be thanking the offensive line for the turnaround season.

Northwestern’s offense exploded on Saturday, putting up 54 points at Michigan State. It was the Wildcats’ second dominant offensive performance in a row, and they’ve now scored 92 points in two games compared to 65 points in their first four games.

Generally, you win football games by scoring more points than the other team, so it’s no surprise that NU’s recent offensive outburst has turned its season around. NU’s three stars, Clayton Thorson, Justin Jackson and Austin Carr, have led the way. In the past two games, Thorson has thrown for 445 yards and six touchdowns (two rushing TD’s also), Jackson has rushed for 353 yards and three TD’s and Carr has 203 receiving yards with five touchdowns.

But that star power can overshadow the reason why NU is scoring more points - the drastic improvement of the offensive line.

NU’s offensive line was often atrocious over the first few games, and everyone from head coach Pat Fitzgerald to the most casual of fans was calling them out. But they’ve responded.

“We just put our heads down and kept working,” senior guard Eric Olson said. “Up front, the offense didn’t start the way we wanted to and me and Connor (Mahoney), the two senior guys on the offensive line, said the only thing we can do is keep working and hopefully the work will pay off. I think starting with the Duke game, for us up front, it’s really started to head in the right direction and we’ve taken a bunch of steps forward.”

The unit of Olson, Mahoney, Blake Hance, Brad North and Tommy Doles has remained mostly intact over the course of the season, and J.B. Butler did a fantastic job stepping in for the injured Mahoney on Saturday. It looks like the unit has truly turned a corner since the trainwreck that was the Illinois State loss, and it’s been the biggest reason for the ‘Cats resurgence.

It’s no secret that NU’s offense starts and ends with the running game, and early in the season, NU couldn't run the ball. Jackson is one of the best running backs in the Big Ten, but even the best players will struggle with a subpar offensive line.

In their first four games, the ‘Cats averaged just 108 rushing yards. They weren’t able to set their offense up - there was no balance, they couldn’t move the ball and they had a hard time extending drives and winning the possession battle. They only won one game - against Duke, when offensive coordinator Mick McCall decided to air it out and have Thorson throw the football 39 times.

But to be successful, NU needed to establish the run. Against Iowa and Michigan State, both wins, the ‘Cats rushed for 198 yards and 209 yards, almost doubling their average in both games. With a more balanced offense, NU has been able light up the scoreboard, and Fitzgerald pointed to the impact of the offensive line after Michigan State.

“Any time you’ve got that type of balance, it gives you an opportunity to have some success,” Fitzgerald said. “To be able to run the ball the way we did today, great credit to our offensive line. Especially those guys up front, they’ve taken a lot of grief and they understand their role and I think they really stepped up well today.”

The Wildcats ran an offensive clinic on Saturday, racking up 490 total yards, 26 first downs, were 10-of-19 on third down and out-possessed Michigan State 35:34 to 24:26. With a strong offensive line (and perhaps a dilapidated MSU defense), NU got push up front, moved the ball, extended drives and was successful on the ground and through the air.

So while Thorson, Jackson and Carr will grab the headlines, it’s Hance, North, Olson, Mahoney, Doles and Butler who will grab victories. NU will continue to go as its offensive line goes, and if the big boys up front keep it up, the ‘Cats turnaround season will only get better.