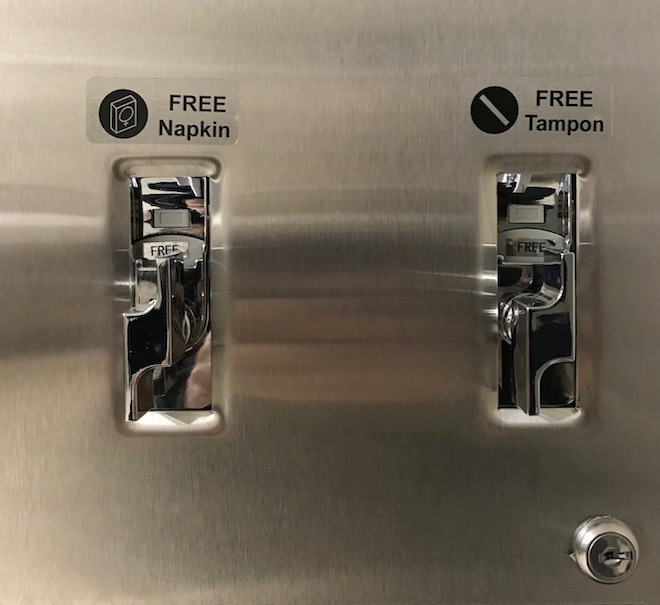 Kresge, along with several other buildings on campus, now offer free menstrual product dispensers in the bathrooms.

After weeks of collaboration between several student organizations, Northwestern now offers free menstrual products in select buildings across campus. The initiative is a pilot program for now – available in Kresge Hall, Main Library, Pancoe Life Sciences Pavilion, the Facilities Management office and a campus building downtown – but, if successful, it could be implemented in every building on campus by fall of 2017.

Offering free menstrual products was something that Sexual Health and Assault Peer Educators (SHAPE), Associated Student Government (ASG), College Feminists and the Rainbow Alliance collaborated on with Northwestern Facilities Management to introduce on campus. Each organization had a unique reason to support the project; in particular, SHAPE Outreach Chair Amanda Odasz said she wanted to help remove the element of taboo surrounding periods.

“I think this project is reflective of a broader effort to destigmatize menstruation, which I as a sex educator think is very important,” Odasz said. “I think it’s important to recognize menstruation is a normal thing that happens with people’s bodies. I don’t think we need to be grossed out about it or talk about it in hushed tones.”

Former College Feminists president Sydney Selix, who is also involved with the project, echoed the importance of looking at tampons as a necessity rather than a luxury. For ASG, President Christina Cilento said student government wanted to pitch in out of a desire to make Northwestern overall more inclusive.

“Our goal as a student government is to make the campus as welcoming and accessible to students as possible, and provide them resources when they need it,” Cilento said. “Also, given our focus this year on accessibility in terms of gender inclusivity, sexuality and income status, we thought providing free menstrual products would be a great thing to support.”

The products will now be funded through Facilities Management like toilet paper or anything else in the restrooms, Odasz said. Dispensers will be available in both the men’s and women’s bathrooms, for those who identify as male but still menstruate. However, the menstrual products in the men’s rooms will be laid out a little differently.

“Let’s say you have someone who is a trans man who menstruates but maybe isn’t out to everyone,” Odasz said, “or doesn’t want the random stranger in the men’s bathroom to see them taking a tampon, for safety and comfort reasons. Because of that, what we’ll have is dispensers in one individual stall.”

To determine the success of the pilot, Facilities Management and the various student organizations will be collecting feedback in several ways. According to Cilento, student awareness and usage will be the biggest factors they’ll look at to monitor how things are going: ASG’s student task force will be monitoring awareness of the program through shares or posts about the initiative on social media, and Facilities Management will be watching how many products are used and any issues that arise with the dispensers. The pilot will also be a smaller-scale way to see if students take advantage of the free products, and if Facilities Management will be able to keep up with demand and refill the products as often as necessary.

In the past, the Facilities Management has had significant issues with student vandalism and burglary to tampon/pad dispensers (so much so that it expects providing the products for free will actually be cheaper than repairing costs from vandalism). Odasz said at one point, product dispensers were even removed from Norris University Center because Facilities Management was spending too much money to repair damaged machines. However, she added that they expect that issue to decrease significantly, since there will no longer be any money in the dispensers to steal.

If you have any comment you want ASG or SHAPE to hear about the free menstrual products, there will be stickers on each dispenser linking to a survey website they’ll be using to collect student feedback. Cilento said students are also welcome to talk to any involved organization directly about suggestions for improvement, so they can make the program as effective and be able to implement it in every building cross-campus by next year.

“We’re really excited this is something we were able to do,” Selix said. “This started with a few people in the ASG office one night at 10 p.m. and has grown into something we’re all really proud to have worked on. Facilities Management was so helpful and we’re glad we could make this happen.”