I follow a sundry group of Instagram accounts featuring protein pancakes, organic peanut butter and people doing pull-ups, and I like to say these images reflect my lifestyle.

But they do provide me some sort of visual serenity: some notion that I am, fittingly, “following” the fitness trends and staying up on what the kids are talking about these days. Though I suppose I am one of these kids myself, I’ve never been to Soul Cycle and I rarely brunch. I haven’t tried weightlifting. I only ate avocado toast once, and my dad gagged watching me so I had to stop.

And yet, I’m not the only one with a habit of scrolling through #fitspo images, though they are often irrelevant to my life. In fact, there are thousands of these “Fitstagrams” (damn the person who coined that term before I could), some of them with millions of followers. Ever heard of Kayla Itsines (@kayla_itsines) or Cassey Ho (@blogilates)? Besides these major accounts, there are thousands upon thousands of other individuals chronicling their daily workouts and eats with the good old ‘gram, so you can work out and eat healthfully vicariously.

But sometimes, Instagrammed healthy living can have a tangible effect. Through my extensive Google research on the topic, I have actually learned that Instagram accounts focused on fitness may have a direct impact on our health by making healthier trends more mainstream. These findings beg the question: are Fitstagrams more beneficial for users, who through maintaining an account for their fitness are held to certain health standards, or viewers, who might be inspired to live more healthfully from seeing said users’ kale salads?

It’s difficult to say, but in determining the answer let’s not forget the cardinal rule of social media: it’s all about self-promotion. Whether you’re an indie Instagrammer who focuses mostly on sidewalk cracks, or a selfie queen like Kim K, you’re doing this mostly for the like-induced dopamine high.

But in a much more real sense, you also may be setting up your Fitstagram account for the purpose of improving your health. Perhaps you are “eating clean,” as they say. Becoming one of the #girlswholift. Joining the #fitfam. Living mindfully. Ruthlessly comparing yourself to unrealistic cultural body standards perpetuated by the media (don’t).

In that case, your creation and maintenance of a Fitstagram might just be awesome for you. In fact, in a 2013 study published in the journal Translational Behavioral Medicine showed that Twitter users who Tweeted their fitness progress lost more weight over six months than those that did not. If you need more of a reason, simply glance at any Fitstagram featured on fitness cultural icon Kayla Itsines’ account: almost every #BBG girl looks more and more swole in each new pic. 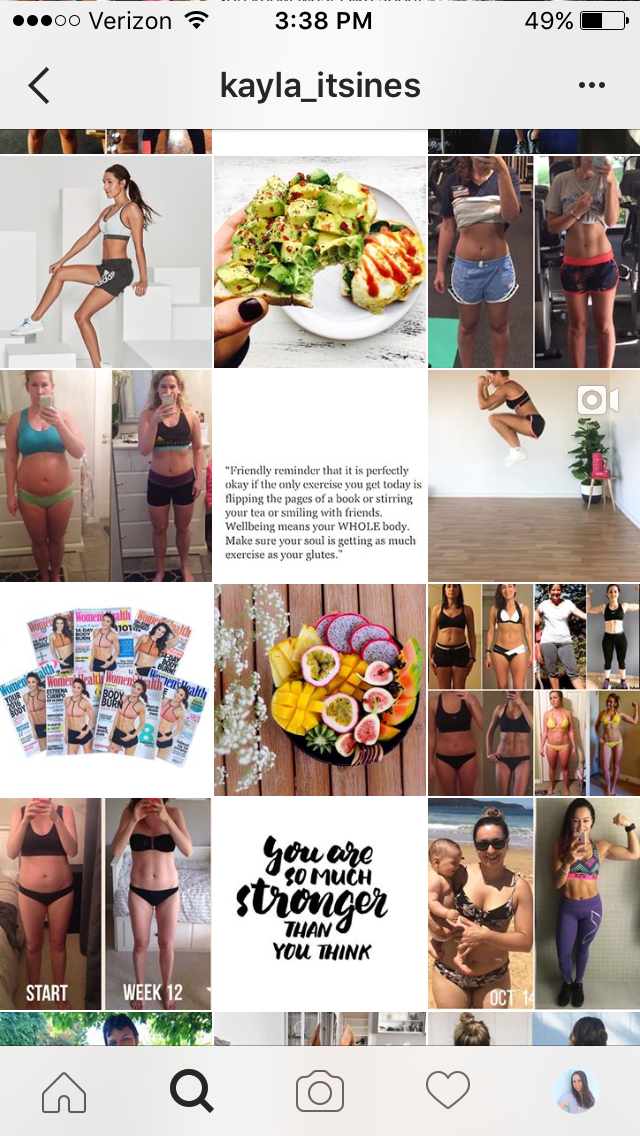 What you might not expect from flaunting your abs and green juice on Insta is the fact that your shameless self-promotion might be helping your friends be healthier, too. A 2011 article published in Harvard Men’s Health Watch noted that in general, people tend to be healthier if the members of their social network are healthier. And if we have learned anything from Mark Zuckerberg, other than the fact that a billion dollars is cooler than a million, it’s that social networks are online, too. AKA your social network can be who you follow on Insta and who follows you, and they can influence whether you eat that burger for dinner.

The point is that Fitstagrams are a symbiotic phenomenon of millennial nature. If you post your workouts and your veggies, it not only helps you stick to your goals for summer bod 2K16, but it inspires and motivates your pals who follow you, too. And as long as you don’t take things to extremes by posting Peeled açai bowls or the wall lights at Soul Cycle one too many times, you can even say you’re doing the world a service. You’re providing your followers with the notion that, despite the 2 a.m. Cheesie’s and too many vodka shots and the fact that you haven’t been to the gym since your pre-acceptance campus tour, there’s still hope. And organic peanut butter.