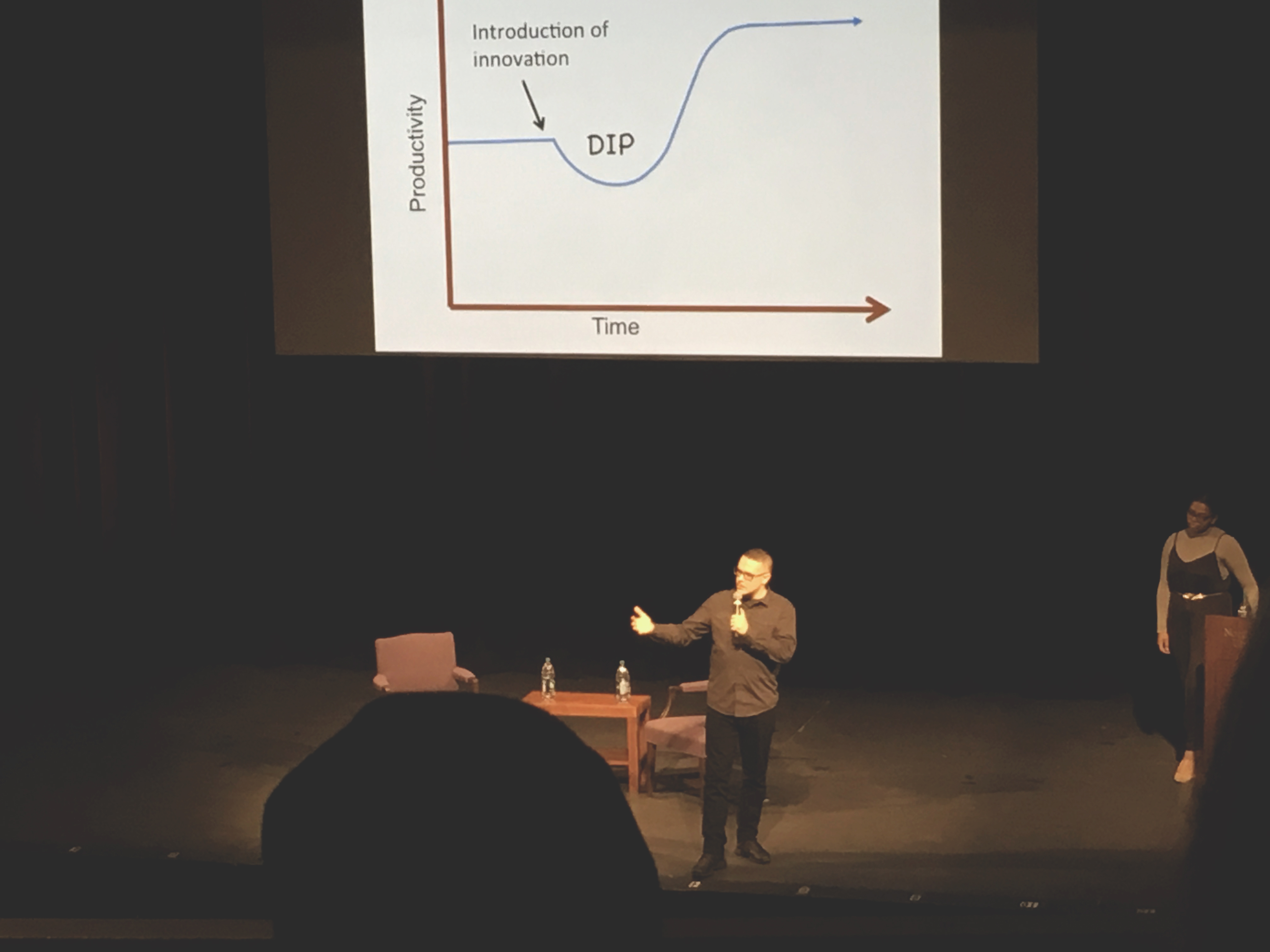 Photo by Audrey Valbuena/North by Northwestern

If you walked into Cahn Auditorium Thursday night, you would have seen a man on stage, flashing a red pointer at an unlabeled graph on the screen. The graph depicted a linear growth model, and you would have heard the man say “This is not how time works.”

On Sept. 9, For Members Only hosted its annual State of the Black Union address, welcoming activist Shaun King to share his insights on stage. Though it may have looked like a typical economics lecture, with graphs and symbols on the big screen, the concepts King brought up were much more complex than anything students face in Econ 201.

King, an activist turned journalist who was deeply involved in the Black Lives Matter Movement and disputed police department claims about Michael Brown's death in Ferguson, shared with the audience how we often view time in an unrealistic way: we assume mankind improves as time passes, but this assumption is far from the truth. The graph is far from linear. Instead, it is jagged, moving up and down as we experience the dips and peaks of quality in mankind.

King started his thoughts with an anecdote from college. After graduating college, fathering 5 children, and working an array of jobs that stifled his passion for activism, King found himself sitting in a class in grad school, looking that the cover of his textbook — a textbook with a white man on the cover. In a time with new instances of police brutality coming out in the news almost every other day, King felt a sentiment towards this man on his textbook he'd not felt in a while.

“I just looked at him, this big hairy white man, and I was like ‘I hate you man,’” remembered King. It seemed irrelvant to be studying history, when so much was going on in the world around King.

But the man on this textbook turned out the be Leopold von Ranke, the father of modern history. King, despite his initial reactions, later found this man to be important: Ranke was the first to outline man’s history, and the first to describe the theory about the misalignment of mankind and time that King emphasized so deeply.

Instead, humanity is in a dip. In contrast to the typical model of progression, King shared a stalk-market model, with progress inconsistently dipping up and down.

In King’s memory, humanity has entered a rut. Obama was elected president, but deep backlash has resulted in huge amounts of violence - and the election of Donald Trump - since. King likened this era to the rut of slavery - which, in the scheme of earthly time, King says, was basically “yesterday.” For the billions of years that have passed, the 250-year-long system of horrific oppression exists in recent human history to show that though time passes, humans - even now - are in no way inclined to improve. To make this more concrete, King brought in statistics about the incredibly high rate of incarceration in the U.S. - one that he feels is intentional.

“This is not a mistake,” said King, of the spike in incarceration. “This is done on purpose. This is actually a system that on all cylinders is doing exactly what it was created to do.”

King, who recently disbanded his organization Justice Together, which worked towards ending police brutality in America, has received backlash in the past two years for his lack of transparency with funds and ending his organized efforts. Yet King addressed an enthused audience to take action, with his four step plan: “It takes people who are energized and organized - it takes a plan. And this is the thing we struggle with - it takes money.”

The audience met these assertions with nods, snaps and hums of agreement.

“I’m very happy with the turnout and the excitement,” said senior Jade Mitchell, Assistant Vice Coordinator of Programming for FMO. “It just warmed my little heart. I was hoping it was going to touch so many people, but to actually see it come true was just like so great to know that we hit this one right on the nose with what the community wanted this year.”

Moments of laughter and silence, brought about by anecdotes about the fast-growth of iPhones, college and having kids, brought King to swiftly say, “I don't know if you've noticed, but its crazy out there. The world is deeply problematic.” He outlined how humanity is in a rut of large proportions, of which the President and hostile race relations are both a product and a symptom.

“He is President because we’re here. We are already here,” said King, of humanity’s current downfall.

Between comments about history, technology, and what it means for us all, King left words of humility to remind us of how we can still matter: “People ask themselves so often ‘I wonder who I would be if I was alive during the Civil Rights movement.’ And that’s a powerful thing to imagine. But you don’t have to imagine who you’d be in that moment. The greatest indication of who you’d be 40 years ago is who you are right now.”

The evening ended in jest: King, who had welcomed questions via Twitter, was unable to answer any as the event ended early to make way for the Hillel speaker, Josh Peck.