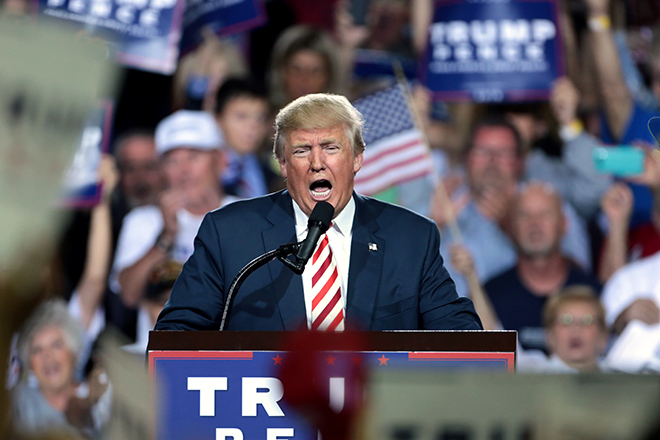 In this election, demographics were everything. Loyalties were scrutinized and divided into categories: male and female, white and non-white, college-educated and high school graduates. Polls are taken, research is done and the demographics of each candidate’s supporters are released.

This year, these statistics have been important in evaluating the election. The basis of support for both Hillary Clinton and Donald Trump greatly divided the nation based on race, education and gender. The majority of Trump voters were seen to be white, evangelical and with lower levels of education; Clinton’s supporters were largely educated, younger, religiously unaffiliated or of color.

Yet there were voters who break these stereotypes. NBN sought out two of these voters – a millennial attending Northwestern, and a female Trump advocate of Women for Trump. Through their vocalized support, NBN gathered insight as to what it means to be a Trump supporter anomaly.

McCormick freshman Andrew Johnson is a libertarian who said he voted for “the lesser of two evils.”

“I don’t think he fully identifies as a Republican candidate, he’s just basing his platform on that,” Johnson said of Trump. “He’s not the typical politician. He just says stuff without thinking about it.”

This keeps Trump honest – or so Women for Trump advocate Alicia (who declined to give her last name) believes.

“I believe [Trump] is the one last chance that we have to secure our independence [because] he’s fighting the entire establishment,” said Alicia. “He’s not beholden to anyone, except the American people. He doesn’t play by the rules, and he doesn’t buy into political correctness.”

Both of these voters, who are currently attaining or have already attained college-level higher education, believe that Trump’s ability to defy political convention allows him to be an effective, straightforward politician.

“I don’t think we need any more of that political correctness – that just inhibits free speech,” said Johnson. “I think that when you speak your mind more, you communicate your message more clearly, and with that you can get more done, and faster. You’re not beating around the bush.”

When questioned about some of the more atypical policies Trump has suggested, qualifications were allowed for Trump’s words.

“Trump supporters take him seriously," said Alicia. “And people can kind of get their panties in a bunch about that terminology, but look into it, what does it mean? We take him seriously. We trust in him. And we know he’s not gonna go and do these insane things. We believe in his policies. We see – it’s reading between the lines essentially.”

This “reading between the lines” happens too, when Trump speaks of Muslims, Mexicans and women within the country, according to Johnson.

“I know he has made comments about Mexicans, but ‘Mexican’ is not a race because anyone can become a Mexican citizen,” said Johnson. “His comments towards women, I don’t agree with. I don’t think it’s locker room talk, but some guys do say those things around other guys inside their conversations. They don’t mean it in an offensive way; it’s just joking around. It’s like guy humor. I don’t think it will breed more hate.”

Alicia, specifically in regards to women, does not believe Trump truly means the things he says.

“[Trump has] a wonderful platform for allowing women to be more independent mothers actually, and business owners. He employs so many women,” she said. “I don’t believe he’s anti-woman, I don’t believe he, as Hillary said, gets ‘angry when dinner’s not ready on the table’.”

However, Alicia also shared that she felt women nowadays were too pressured to go into the workforce. Trump, she feels, legitimizes the role of women as mothers and believes that his ideas will help to regain the family unit that the “establishment” has sought to destroy.

“Just being a woman I'm told that I’m better off if I get a career,” said Alicia. “This may sound archaic, I’ve just, I’ve been looking around, I’ve had multiple businesses on my own, friends who also have their own businesses who are mothers – they say they would drop their businesses in a heartbeat to be mothers. That’s really important. I think the family unit is huge in the success and backbone of our country and I see that through the media and Hollywood, I see that getting stripped away. There are so many polls asking women who are the most fulfilled women and typically it’s mothers.”

Johnson said he believes, in the grand scheme of things, these comments against women and other minority groups are nothing new.

“You know, I voted for Barack Obama eight years ago,” Alicia said. “I very, very much believed what I was taught in college. I just see through it now. What we have right now is a bastardization of the Constitution, because of democracy. There are so many reasons I support Trump. For the first time in my life I’m proud to be an American. I cry now when I think about my country. I cry with pride at what we’ve accomplished. It’s just so obvious to see the massive amount of collusion that’s going on, and we’ve been hoodwinked; the American population has been hoodwinked. We need true leadership in this country. Trump is the ultimate outsider. That’s significant.”

A college-educated woman. A millennial. Both of these are Trump voters who rest outside the data’s proven norms. Though some like to limit the perceived influence of the Trump campaign to only those in the established “Trump-type” constituencies, many supporters, online and around the U.S., transcend these dimensions. As the election comes to a close with a Trump victory, a great debate lays upon America’s shoulders: was Trump really such an anomaly?