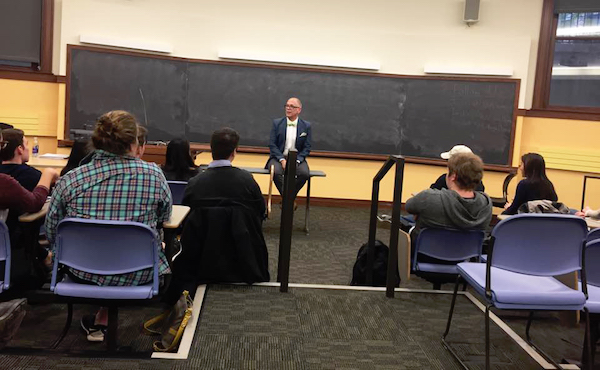 LGBTQ activist Jim Obergefell spoke about his experience arguing in front of the Supreme Court in Harris Hall Thursday night.

On Thursday night, College Democrats hosted Jim Obergefell, the plaintiff in the Supreme Court case that legalized same-sex marriage, as their spring speaker. Obergfell told both his story and the story of his late husband John Arthur. Obergefell also discussed the effect the case has had on American society and his fears about the future of LGBTQ righst in the Trump Administration.

Obergefell started his talk by recalling a realization he had about the phrase “equal justice under the law” while he waited for the Supreme Court to give an oral argument.

“That phrase came to mean something very important to me,” Obergefell said, “And on June 26, 2015, I’m sitting in a courtroom wondering, is this is going to be the day the Supreme Court says, ‘Yeah, Jim, you and your husband matter.’”

Obergefell had met Arthur twice before going to a New Year's Eve Party at Arthur’s house and falling in love with him. They lived together in Cincinnati at a time when the city had developed a reputation for hostility toward gay people; residents even voted down a charter that guaranteed protections for LGBTQ people. In spite of the anti-gay sentiment in the city, Obergefell and Arthur had discussed the possibility of someday getting married if same-sex marriage ever became legal.

However, Arthur was diagnosed with ALS, a disease that is often fatal, in 2011. While the disease took a toll on the couple, a 2013 Supreme Court case that made parts of the Defense of Marriage Act unconstitutional gave them hope that they could marry before Arthur’s death. They rented a charter jet and flew to Maryland, where Arthur’s aunt officiated the wedding.

While the Supreme Court debated the case, Obergefell described his favorite moment when an Evangelical Republican offered him words of support.

“That was one of the moments when I realized that our story, it resonates with people,” Obergefell said. “It was because everybody loves someone, and everybody loses someone they love and people can connect and relate to that.”

While fielding questions from students, Obergefell expressed concern that Supreme Court Justice Anthony Kennedy would retire during the Trump administration, allowing for Trump to appoint a conservative judge that could revoke Obergefell’s case. He also encouraged the audience to vote in state and local elections and volunteer for causes that they support.

“I was in Boise, Idaho [on] the day of the decision and they unfurled a big rainbow flag on the steps of one of the most conservative buildings, the Idaho State capitol,” Lee said, “It’s something that we have to keep remembering and that we can’t take that right for granted.”

SESP sophomore Sara Saltzer attended the event and she was pleasantly surprised by Obergefell’s positivity.

“To go through so much in your life, how are you not angry at the world when so much has happened to you?” she said.