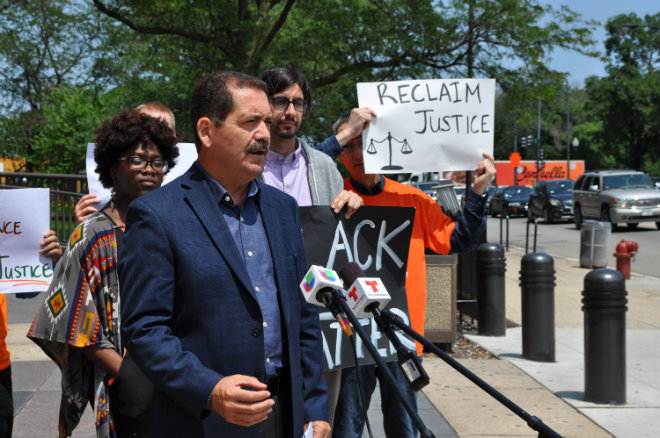 Former Chicago mayoral candidate Jesús ‘Chuy’ Garcia spoke to a room of students and professors at Northwestern University as a part of the political science department’s first annual Chicago Speaker Series on Tuesday. Garcia said that although his recent campaign against Mayor Rahm Emanuel did not result in his election, he believes that its most significant achievement was the progressive coalition it built across many diverse Chicago communities.

“The role that I see for myself over the next several years is helping to nourish the coalition that came out of the campaign,” Garcia said. “I want to continue to work on improving relationships of trust in the city between African-Americans and Latinos and Asians and the LGBTQ community and really all of the communities across the city.”

The mayoral election, which took place last April, resulted in a historic runoff in which Emanuel won 56 percent of the vote and Garcia won 44. Emanuel was elected to a second term in office as Chicago’s mayor, despite unpopular initiatives during his first term including the closing of 50 Chicago public schools as well as accusations that the mayor was sympathizing with wealthy interests.

Garcia said that he did not initially have any sort of plans to run in the mayoral election last year, but when candidate Karen Lewis discovered that she had a brain tumor, she asked Garcia to run for the position. “She laid out why it was important for a long-term progressive to run for mayor, especially in light of Chicago’s history of racial politics,” Garcia said.

Garcia highlighted the differences between his campaign and Emanuel’s campaign, noting that his campaign spent between $5 and $7 million compared to Emanuel’s $30 million. Garcia believes that his progressive campaign made a lasting mark on the Chicago community, but there are major issues of inequality in the city that still remain unaddressed.

“Chicago has not settled back into a sense of normalcy,” Garcia said. “Chicago remains a very divided city, a tense city and most notably, the issue that remains most challenging to the city is of course the violence.”

Garcia said that this issue of violence in Chicago has much to do with a lack of jobs available for disadvantaged, minority youth.

“Nothing stops a bullet better than a job,” Garcia said.

Garcia addressed questions raised by Northwestern students in the room, talking about his own politcal leanings: his disgust with Chicago’s number of incarcerated citizens and mass incarceration’s relationship with inequality, his support of the Black Lives Matter movement and his advocacy and campaign work for Sen. Bernie Sanders’ presidential campaign. Garcia also commented on the importance of Cook County’s upcoming state’s attorney election. Anita Alvarez, the current state's attorney, is running for re-election even though she is under pressure to resign from her position. Earlier this year, details emerged about her role in prosecuting and investigating the officer who shot and killed teenager Laquan McDonald. 400 days passed before Alvarez' office charged Officer Jason Van Dyke with the shooting.

Medill senior Matthew Wright, who is involved with the prison divestment campaign Unshackle NU, said he was glad to hear Garcia speak out against mass incarceration in Chicago.

“I think that his bringing up the way that Chicago is complicit is really important to address,” Wright said. “I believe that if you really want to engage with Chicago, that means engaging with it on all fronts and getting out of the prettiness of it by addressing all of the relevant issues that Chicago faces, and I am glad that Garcia could demonstrate this to Northwestern students.”

Weinberg senior Samuel Niiro agreed that it is crucial that Northwestern students engage with Chicago politics.

“I think it’s critical because in many cases, Northwestern students have the time and the resources to get out there and volunteer and have significant impacts in Chicago politics,” Niiro said. “Beyond that, a lot of it is Cook County level stuff. We can vote for state’s attorney, so it’s important that we stay engaged.”