Student groups are looking deeper at the idea of open dialogue on campus this week after Palestinian activist Bassem Eid was forced to cancel his speech at Hillel on Sunday due to the presence of hecklers.

Eid, the founder of the Jerusalem-based Palestinian Human Rights Monitoring group, was brought to campus by Hillel through its involvement with the Israel Education Center. Wildcats for Israel and J Street U Northwestern both originally co-sponsored the event, but after Eid encountered issues at other area schools, J Street pulled their sponsorship through a post on their Facebook page. 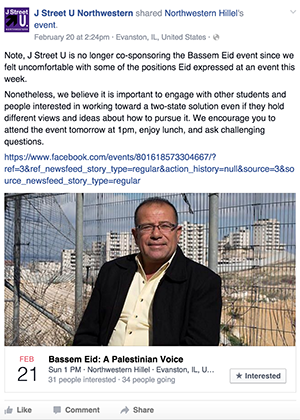 Ben Weinberg, a Weinberg sophomore and one of J Street’s co-heads, said the student group originally elected to endorse Eid because he shared similar goals to them.

“J Street wants to engage with speakers who have similar views of peace and progress,” Weinberg said.

However, after hearing what happened at other schools, J Street said they felt uncomfortable endorsing his views after his speech at University of Chicago, where he showed a lack of the nuance within the two-state solution J Street was looking for in his speech. They pulled their sponsorship a day before Eid was initially supposed to come to Northwestern.

“Pulling our endorsement does not mean we were unwilling to engage. We as J Street U want to engage with views across the spectrum,” Weinberg said. “That’s really important. That’s not us saying we don’t believe [the speech] should’ve happened.”

Wildcats for Israel was similarly disappointed with the cancellation of the speech.

“I thought Northwestern was a safe space to air perspectives and where we are challenged to ask provocative questions,” said Ross Krasner, a Medill sophomore and one of Wildcats for Israel’s co-heads. “It’s a shame that views are marginalized here in a very tangible way.” 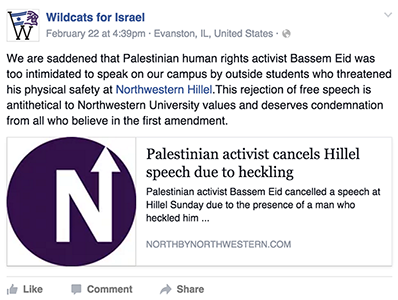 Students for Justice in Palestine (SJP) was also disappointed about a lack of space to share views, but for them, it went beyond this event.

“The event titled ‘A Palestinian Voice’ was organized without a single Palestinian student activist behind it,” said a representative from SJP. The source asked not to be named due to past aggression he and SJP have experienced on campus. He and other members of the organization said they are angry with the continuous silencing of Palestinian voices on campus, but he doesn’t think Bassem Eid’s speech would have done much to assuage that.

“SJP stands in solidarity with Palestinian society; Bassem does not,” the representative said. “His success has come because he is a Palestinian willing to present the same points as the Israeli right wing. His entire rhetoric is based on the denial of an oppressive power-dynamic between the Israeli and Palestinian societies; it is difficult to see what he hopes to accomplish.”

Though there is disagreement among student groups regarding whether Eid should have spoken and if his views were shared by students, they all agreed on a need for discussion and the sharing of opinions. Both Weinberg and Krasner said their groups had opened some discourse after the event’s cancellation. However, the appearance of a more accepting Northwestern doesn’t seem to be right around the corner.

“It’s okay to disagree,” Weinberg said. “But it's not okay to not allow someone to speak.”