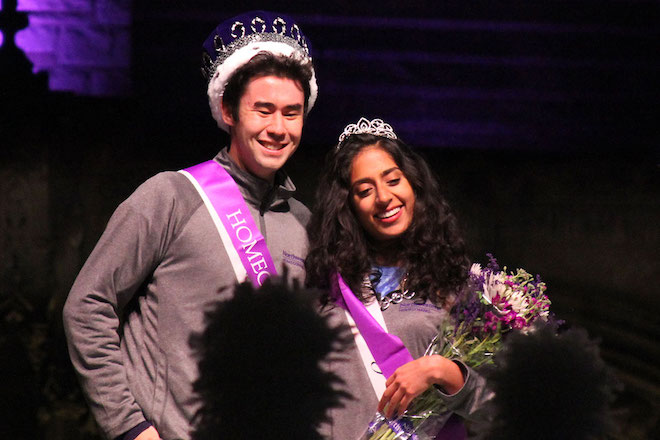 A sorority president, a musical theater star and a neuroscience major don’t seem to have much in common. These three students “Go! [to] U Northwestern,” where they make up the 2017 Homecoming Court with nine other upperclassmen. This year, the student body will cast their inaugural votes for one Homecoming Wildcat, rather than the traditional king and queen pair.

“I think that it’s a small step, but I think that it could potentially have a lot of effects symbolically,” said 2017 Court member Emma Brick. “Homecoming royalty represents those who are most recognized in the Northwestern community, and saying that that doesn’t have to be someone who fits into the gender binary can be something that’s really powerful.”

When Brick first interviewed to be a part of the Homecoming royalty last spring, she was presented with a slightly different change. Two winners would still be crowned, but they would choose their titles: King, Queen or whatever suited their fancy. Over the summer, however, the switch shifted further toward gender inclusivity, an idea championed by Kody Keckler, a member of last year’s Court.

“From my perspective, that was both heteronormative, where you have the man and the woman running to be King and Queen, and then also it was very binary and not reflective of the range of people at Northwestern,” he said. “Like people who don’t fit neatly either into the category of man or woman, who would rather not be placed in that binary at all.”

Keckler graduated last year, but as a Communication Studies and Gender and Sexuality Studies double major, the topic was never far from his heart. Better now than later, he says; he thinks the shift should have happened long ago.

“I was in Rainbow Alliance; these are the issues that I live and breathe in my daily life,” Keckler said. “So when people come up and are unreasonably upset about things like this sort of change, I don’t have the time and energy for that. I need to [switch up] the change … where I see need for it.”

The Northwestern motto, “Whatsoever things are true,” highlights the importance of all that is true in the world, a value integral to the university and its “royalty,” by extension. While Keckler embodied that spirit last season, this year, the ideals of the institution can look different for each individual.

“I don’t know that they have to be the same for everyone, but I think the general care for the school … even if we maybe find fault in Northwestern or see it as an imperfect place, that we feel committed to making it better through our own time as undergrads,” Brick said. “I think a big part of that is involving ourselves in communities that care.”

Brick views these traits as criteria for nomination to the Court, which aims to represent the pillars of the college as a whole. The Northwestern Homecoming website refers to the event as an “important part of Northwestern’s traditions and… student experience,” preserving the school’s culture yet adapting to fit its mentality.

“To me, the best qualities of Northwestern students are Northwestern students’ ability to both be critical of something, whether it’s Northwestern as a whole, or society or whatever their field of study is, even, but then also to be able to find the remnants of goodness and joy,” Keckler said. “Those are like rooting for the football team or having Purple Pride or being super involved in clubs on campus.”

Known for its “AND is in our DNA” outlook, the Wildcat campus expanded its academic and extracurricular inclusivity to encompass this alumni tradition as well. Homecoming Executive Board Co-Chair Emine Yücel ran into the idea that an older alumni population may oppose the change, but forged ahead based on support from last year’s Court.

“It was traditional back then, and it was what it was, but now if people want to see different things and people want to express themselves and get away from that heteronormative gender norm thing,” she said. “I think that was the biggest thing that made it for us to be like, ‘Okay, we’ve gotta do it this year.’”

Northwestern isn’t alone in this move toward gender inclusivity, but it is toward the forefront in this sphere. Yücel mentioned that other Big Ten schools – University of Iowa, University of Minnesota and University of Nebraska – have all tweaked their Homecoming Courts as well, crowning two royals without gender requirements for selection.

“We live in a different era now, and yeah, things should be better, but if we don’t do these small changes, we can’t expect them to get better,” Yücel said. “We can’t expect everyone to follow what we believe is right if we’re not creating a path for them to help also initiate the change with us.”