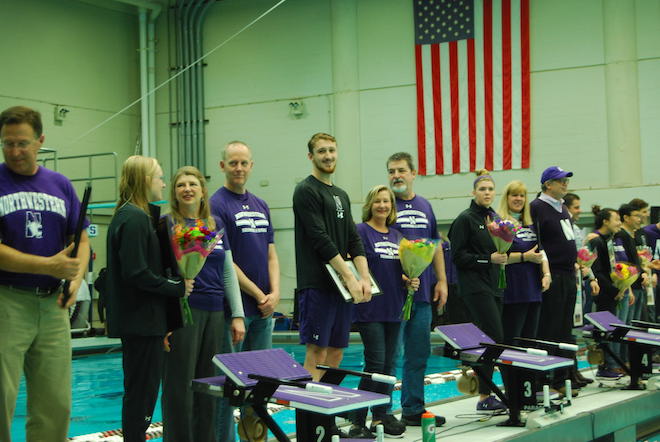 They couldn’t pick up the wins they wanted, but the send-off didn't seem bitter.

This Friday and Saturday, the Northwestern swimming and diving team faced off against Minnesota and Purdue in their final home meet of the season. Though they picked up a handful of individual victories, the team ultimately fell to both schools. The women’s side lost to the Golden Gophers and Boilermakers 202-151 and 186-167, respectively, while the men fell 226-127 and 197-156. It was the seniors’ last showcase at the Norris Aquatics Center, and the team will now prepare for the Big Ten Championships less than a month away.

The Wildcats struck first on Friday with a victory in the women’s 200-yard medley relay, thanks to the efforts of sophomores Calypso Sheridan and Sophie Angus, freshman Miriam Guevara and junior Malorie Han. The next ’Cat to win was sophomore DJ Hwang five events later in the 1000-yard freestyle. Hwang’s finish was the best time in event for Northwestern this season, earning him cheers after he touched the wall.

Despite the two wins, Minnesota and Purdue had the upper-hand for much of evening, taking nearly the rest of the event wins. Sheridan turned in a strong 200-yard individual medley (IM) performance for the team’s third and final win of the day. Champion diver and senior Olivia Rosendahl finished second in the 3-meter dive, while first-year Yohan Eskrick-Parkinson landed just at seventh in the 1-meter. The two divers would turn in the same team-leading performances the following day in the 1- and 3-meter events, respectively.

Saturday saw much of the same impactful swimming from Northwestern’s two Big Ten opponents. The Gophers finished the weekend setting two pool records in the breaststroke, during the women’s 100 and the men’s 200, and came away with nearly a dozen B-Cuts. The Boilermakers turned in an additional four wins on Saturday to add to their six on Friday.

The Wildcats won just three more events on Saturday, but two of them came in the 400 IM. Sheridan and Sophomore Ilektra Lebl finished first and second on the women’s side. Sophomore Jeffrey Durmer won for the men while seniors Tyler Lis and Justin Hanson finished third and fourth. The team’s final victory was in the 200 backstroke thanks to the efforts of first-year Manu Bacarizo, who has been invaluable for Northwestern since his first meet this year. Senior Jack Thorne followed Bacarizo for second place.

Though the team wasn’t able to consistently keep up with their two opponents, a couple of seniors said that the team is headed for an upswing in the future.

“Beforehand I knew that we could be competitive against these teams,” Lis said, “which was not a feeling I had prior years, so that was exciting . . . this team [now] makes me excited to come back and cheer, and be a part of this and say that I was a part of Northwestern swim-dive.”

“It was really exciting to come in to today and be in the fight like our coaches have said to us after this meet today,” senior Alex Grimes said, “because we haven’t been in that position in years past.”

The swimmers also viewed director Jeremy Kipp and the new coaching staff as assets to the team’s future.

“I think these coaches are exactly what Northwestern student-athletes need,” Lis said. “They understand this balance of academics and athletics, and they know what motivates us. Coach Kipp did an incredible job of making an incredible coaching staff.”

The women’s Big Ten Championships will take place from February 20-23, while the men will compete during Feb. 27 to March 2.

That's a wrap from the Norris Aquatics Center! pic.twitter.com/MVBaoM2WxZ