In every bathroom stall in my study abroad program’s academic buildings, there’s a sign hanging at seated-on-the-toilet level with tips on “how to make the most of your time in Denmark.” The poster, literally titled Toilet Talk, is mostly filled with straightforward advice: one corner implores the unassuming reader to attend the monthly trivia nights at the student house – they’re in English! – while another talks about the importance of renting a bike, but to be sure to learn the turn signals so you don’t get run over. 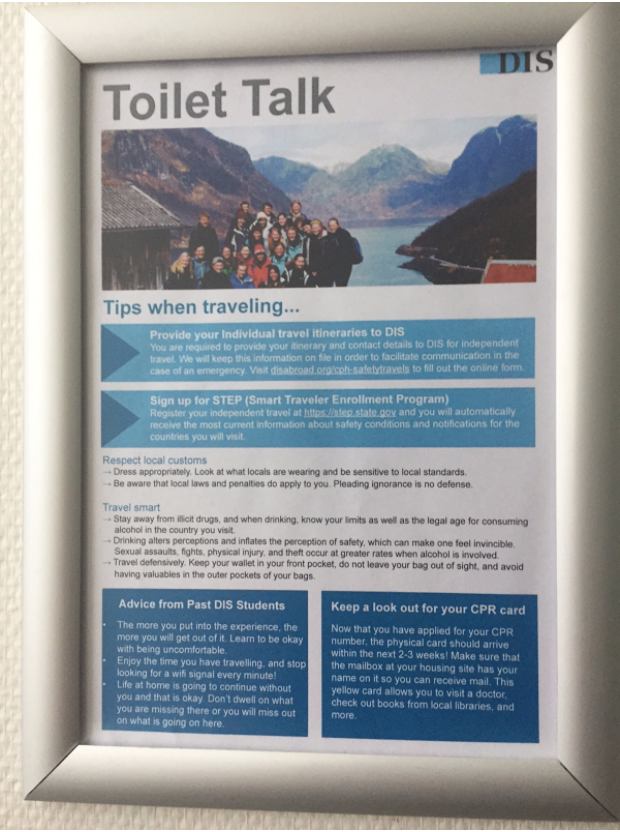 Hidden in a section deferentially labeled “Advice from Past DIS Students,” however, is the surprisingly existential tip not to “dwell” on what’s happening back at school. “Life at home is going to continue without you, and that’s okay,” it says in a mock reassuring manner. But is it really okay, toilet stall sign? And who are you to tell me what I should or should not be dwelling on?

Unfortunately, I’ve since had to admit that the toilet stall sign is probably right.

Despite how many times we may have been told we would be “too busy to notice” what’s going on back at school, I am here to say that I notice. There’s still plenty of time to scroll through Facebook feeds and to skim irrelevant GroupMe notifications. There’s also the added factor that people don’t simply stop caring about what’s going on in their friends’ lives back at school just because they’re not currently there. If anything, you care more, because you’re not there to experience it with them.

This post was originally supposed to be about FOMO. Which it still is, in a way. But after talking to a bunch of people about missing tailgates and club initiations, about sadly scrolling through texts received in the middle of the night due to the time difference making it such that we’re asleep during most of the Chicago day, and after being honest with myself, I realized that the fear is not just one of missing out, it’s also of being forgotten. In the attempt to prevent becoming irrelevant, I’ve spent more hours than I care to admit Skyping school friends from the bathroom floor of my apartment. Why the bathroom floor? Well, it’s the only place to realistically escape my nine apartment-mates, and apparently bathrooms are an unintended theme of this post.

Maybe it’s because I’m a transfer and never got the chance to get sick of campus or my best friends, or maybe I just don’t particularly like seeing all the cute purple prideful pictures that I’m not a part of, but somehow being in an exciting new place filled with exciting new people is not particularly exciting.

Some other NU students reassured me that despite how much fun they’re having abroad and how much they love the cities they’re studying in, I’m not alone in wishing I could teleport back to NU for a quick BYOB dinner at Cozy Noodles. (I’ve staunchly avoided the, apparently great, Thai food here because it just wouldn’t be the same.)

Devon Kerr, a Comm junior who’s in Florence for the semester, explained how he kept getting notifications from GroupMes imploring that the group get a picture during welcome week. “I was just like, 'Can we get another one in four months....?’"

Even when proactive enough to mute GroupMe notifications, opening the app to check even an abroad-related chat means being notified of exactly how many comments you’ve missed. Therefore completely defeating the purpose of muting.

“You can't win. But leaving is aggressive. You can't leave the GroupMe,” Devon added.

Devon went on to describe that he always knew going abroad would come with the opportunity cost of missing out on NU classes, friends and organizations. Although he ultimately came to the conclusion that studying abroad would be worth it, “it is always sad to get those listserv emails for auditions or applications that I can't go out for.”

The harshness of being notified of every party, meal and person who’s locked out of the sorority house and really needs to be let in is a theme that came up repeatedly during my conversations.

“Every single NU-related email, Facebook event, Insta pic or GroupMe notification I see is like a little pin pricking me right in the feels,” said Kaitlyn Budrow, who’s in Prague for the semester.

Emily Vogt, who’s also spending the semester in Copenhagen, explained that while she’s able to remain unaffected by most of what’s going on at school, there have been certain events that she’s had a harder time missing out on. “I’ve stayed in my Sailing Team social media groups and have followed all of our recruitment process going on at NU with the new members. Because there are so many fun traditions around this time of year for the team, not to mention the excitement of having new faces to welcome, the past week has been really the only time I've wished I could jet myself back to Evanston for a second.”

Then there are those who are mysteriously able to remain in the moment, and seem to have the opposite response to NU-related emails and notifications.

“All of the emails and other notifications serve as a reminder that I don't have to worry about any responsibilities back home,” said SESP junior Scott Gerson, who’s in Copenhagen for the semester. “I get great satisfaction in seeing a full inbox and getting to mark all purple emails as read.”

This piece is part of the ongoing series "Not a Study Abroad Blog." If you're interested in being interviewed about your own experience abroad or in writing a post, please email one of the editors at rachelwolfe2018@u.northwestern.edu or or mollieleavitt2018@u.northwestern.edu. Also, follow our Instagram and submit photos of your daily mediocrities to @notastudyabroadinsta