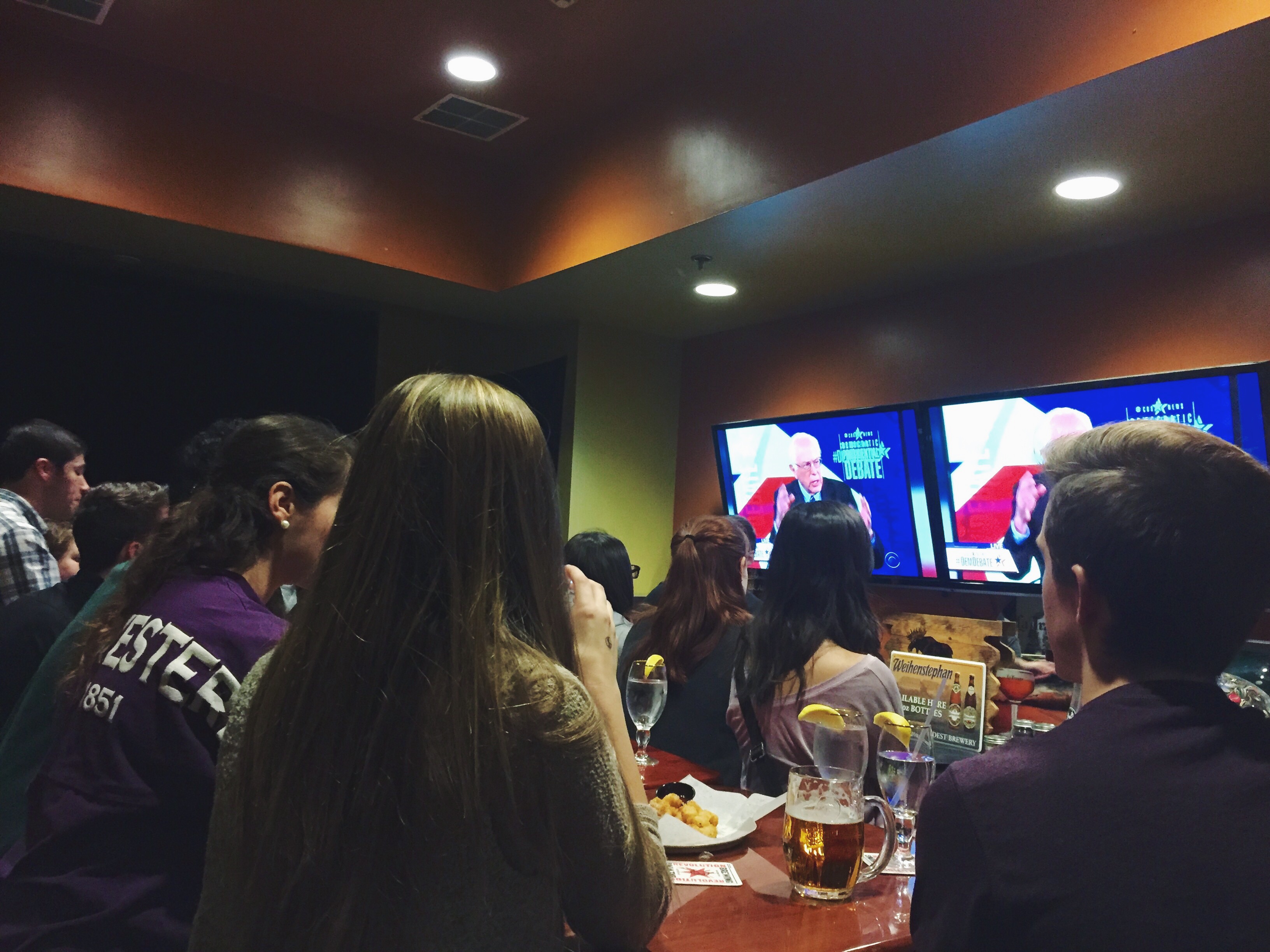 NU for Hillary gathered at World of Beer on Saturday night to watch the #DemDebate. Senior and political science major Kevin Cheng said her performance in the debate solidified his support for her.

"During the foreign policy section, I think she really clearly distinguished herself as a former Secretary of State as someone who really knows the depth of the issues and not just the broad strokes, she got into specific countries' situations, I thought that was very impressive," Cheng said.

Weinberg senior Samantha Greenberg said she was proud of Clinton for how she handled the tough issues.

"Right now, she's finally tackling all of her critics about her big campaign donors and the Wall Street issue, and I think she's doing it very articulately," Greenberg said. "As a female I can relate to [the fact that] people attack her appearance, but I think that she looks amazing, polished and presidential. I'm really proud of how she's presented herself."

While they weren't exactly "Feeling the Bern," his comments about noted socialist Dwight D. Eisenhower inspired laughter from the crowd.

Even unidentified man Martin O'Malley got a few smiles when referring to Chicago's most prominent skyscraper defacer as an "immigrant bashing carnival barker."

Racial Tensions From Mizzou to NU 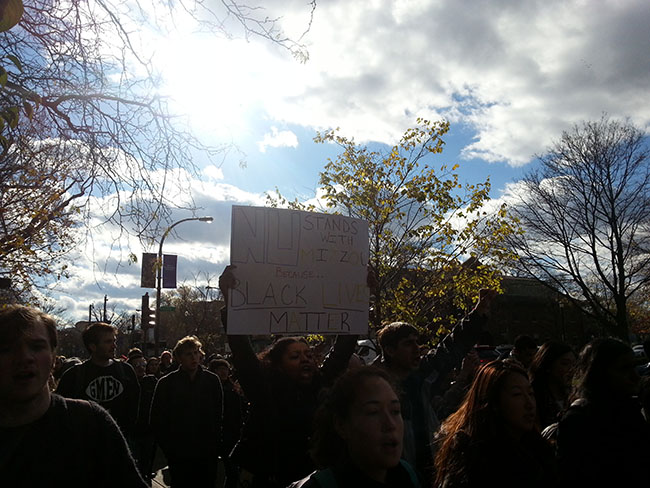 Tim Wolfe, President of the University of Missouri, resigned this past Monday following protests for him to step down, as many students felt he inadequately handled discrimination on campus. The most notable protests against President Wolfe on campus have been football players refusing to play, students rallying in a tent village on the quad and a hunger strike by alumnus Jonathan Butler, willing to risk his life unless Wolfe stepped down.

Why are students protesting?

Several incidents went unaddressed by the university’s president. The student government president, who is black, said people in a pickup truck harassed him with racial slurs. A similar event occurred again during homecoming week. Unfortunately, these incidents seem common, as Cynthia Frisby, a black professor, was quoted saying, “I have been called the N-word too many times to count.” Furthermore, a swastika drawn in human feces was found in one of the dorms, and many anonymous death threats appeared on Yik Yak, for which a student has been taken into custody. The university was presented with a list of demands by protestors to try to combat more of these incidents from happening, ensure student safety and foster an inclusive environment on campus. Currently, students of color on campus are fearful for their safety, and many have left the dorms on campus and gone home.

How are faculty members and administrators handling it?

Some professors have cancelled classes and exams in light of security threats. Dr. Dale Brigham was among those who did not cancel class, and after his controversial email telling students to “stand up to bullies” was highlighted by the media he resigned from his teaching position. The administration has also elected a new interim president. Michael Middleton, a recently retired administrator from the school, will be filling the position of president until a permanent replacement is found for Wolfe.

Do we see similar protests at NU?

This past Friday, hundreds of students met up at the Black House to join a march to stand in solidarity with Mizzou. The march made its way up to the Henry Crown Sports Pavilion, where protestors interrupted a ceremony for a new construction project on campus to propose their own list of demands. Later that evening, a panel discussion was held at Lutkin Memorial Hall. The discussion focused on student’s grievances and how to make our own campus more inclusive.

Amidst the whirlwind of tensions across college and university campuses, students held a protest against student loan debt for higher education, a rally for tuition-free public colleges, and a petition for a minimum wage hike for campus workers. The nationwide event was dubbed the “Million Student March.”

What exactly happened at the protests?

At Northeastern University, about 50 students gathered in a rally carrying signs that read “Degrees not receipts” and “Is this a school or a corporation?” These marches were also prominent at Texas State, UMass Amherst, and Depaul University in Chicago. The goal is to make public school tuition-free, cancel all student debt, and raise the minimum wage to $15 an hour for campus workers.

How will this affect anything?

These issues have become increasingly relevant, and the majority of the problems are expected to be debated in the upcoming presidential elections, especially with the major demand expressed today by students nationwide. Amid an ailing economy and job market, many college graduates struggle to make payments when saddled with debt. Democratic hopeful Bernie Sanders has vowed to make tuition free at public universities and colleges, and has pledged to cut interest rates for student loans. His rival Hillary Clinton has said she would increase access to tuition grants, let graduates refinance loans at lower interest rates, and streamline income-based repayment plans. Florida U.S. Senator Marco Rubio says he would establish an income-based repayment system for federal student loans and would simplify applications for federal aid.

This issue hits very close to home (literally, as protests were happening at DePaul) for every student at Northwestern. NU has a high tuition that increases almost yearly (this year, Northwestern’s tuition was raised by about 1.5%). The protests are just one part of a continued push for policies which will make higher education more affordable. 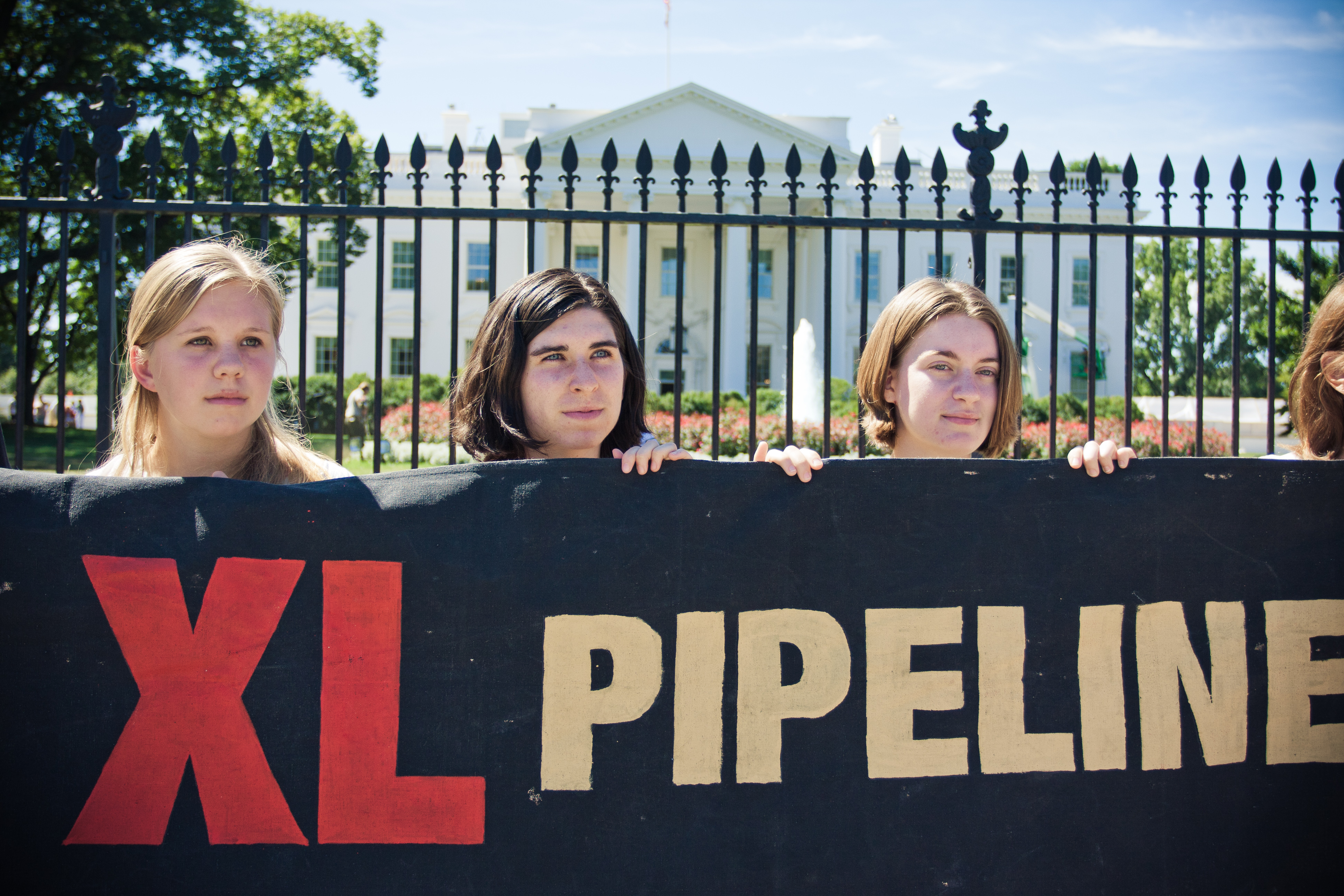 So this isn’t the beer?

Not quite. The Keystone XL is an oil pipeline that runs from Canada to Texas, and Congress has approved three phases of the pipeline’s development. However, Obama vetoed the fourth phase, which would expand it.

Obama vetoed the bill both because he said it would not positively impact the economy and because “shipping dirtier crude oil into our country would not increase America’s energy security.”

How does this relate to recent Northwestern environmental activism?

“When Obama rejected the pipeline, he specifically said he saw that fossil fuels had to remain undeveloped or underground in order to create a sustainable future,” Cilento said. “I think this is a huge validation of what we’ve been doing on campus.”