First-year swimmer Calypso Sheridan posted an impressive four total first-place finishes during the meet. She secured solo top placings in the 100- and 200-yard backstroke and the 200-yard individual medley, and contributed to the women’s team’s 200-yard medley relay. 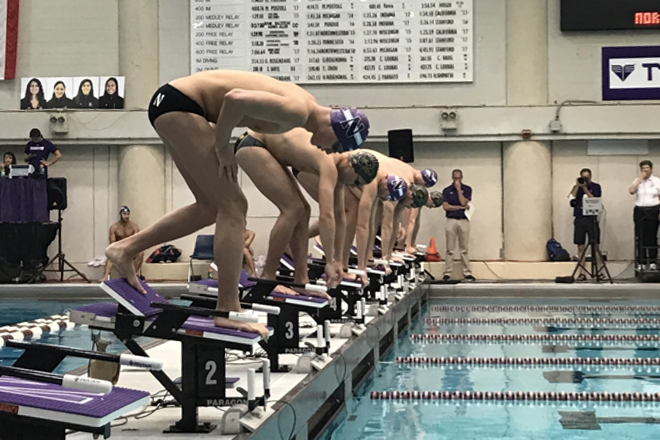 The men's and women's teams split their meet against the University of Iowa.

Other notable performances for the team came from senior Mary Warren, who in solo and relay events had two first-place and two second-place finishes combined, and junior Olivia Rosendahl, who captured first in the one- and three-meter diving events. The women Wildcats also claimed the top three results in both the 1,000-yard freestyle and 200-yard individual medley.

“It’s all the hard work paying off,” Warren said of the meet, which was the first for the women’s team in 2018.

Junior Will Hofstadter earned two of the men’s team’s three victories in the 100- and 200-yard breaststroke events. DJ Hwang, another first-year, also contributed with his win in the 1,000-yard freestyle event. The team struggled in other areas, however. For example, they barely missed out on a second-place finish in the 200-yard medley relay and had to settle for third, and fell short of the top three spots in the 100-yard freestyle entirely.

Despite the defeat, senior Almog Olshtein saw the positives in the day. “I think overall we did pretty well, even though we lost today,” he said. “We improved our times from last week. At the same time, we need to take in mind that we’re preparing for a bigger meet that is going to come in a month, the Big Ten Championships.”

He also spoke about the team’s practices as a catalyst for ambition. “Every Tuesday night we go off the blocks, and some of the people are just going insane times in practice,” Olshtein said. “So it gives a lot of motivation, a lot of energy and big hopes for the end of the season.”

On the occasion of Senior’s Day, Warren wasn’t afraid to admit there were “a lot of tears.”

“It’s just really special because I’ve been swimming since I was like five,” she said. “So having that end soon is so bittersweet. ... Mostly sweet, just because I’m ready to move on, but bitter because I’m gonna really miss this team and everything that we’ve had.”

Both teams will travel to Minneapolis this upcoming Friday and Saturday to compete in final season meets against Minnesota and Purdue before the Big Ten Championships in February.