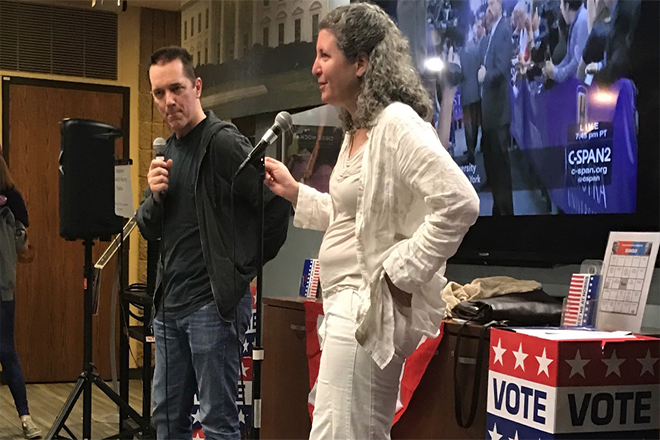 Political science professors Karen Alter and Jeffrey Winters led a brief wrap-up discussion on the debate after it was over.

Minutes before the first presidential debate, dozens of students congregated at Norris to watch the political spectacle (er, discourse) about to ensue. Due to such a large turnout, many students ended up sitting cross-legged on the floor, squished in against the walls or sitting on the armrests of couches. As it grew closer to showtime, one student started a countdown, and soon, the TV clicked on and moderator Lester Holt’s serious face appeared on the screen to cheers from the group.

The debate was predicted to have nearly 100 million viewers, which is an impressive feat for a program not affiliated with football. However, many tuned in simply to see how Donald Trump and Hillary Clinton would handle each other, rather than to hear the candidates’ positions. McCormick freshman Kate Williams said she found the debate mainly humorous.

“[The debate] was entertaining, but should it be entertaining?” Williams said. “Is that really a quality I should be looking for in a presidential debate?”

While the debate did have many comical elements, there were some serious policy questions answered as well. The night’s entertainment kicked off with a question about economics, which quickly set the tone for the political conversation. Clinton’s introductory, sarcastic remark, “Donald, it’s good to be with you” drew raucous laughter from the Norris crowd, but the former secretary of state quickly grew serious when asked about her plan to create jobs. Trump then talked about his tax plan, but soon the candidates’ personal controversies – namely, Clinton’s private email account and Trump’s failure to release his tax returns – turned the debate antagonistic.

“[The candidates] were very hostile,” Weinberg freshman Makyla Knauf said. “I’ve never watched any of the other debates, but it felt like they were attacking each other a lot. It wasn’t constructive; it was a lot of insulting the other party and trying to degrade them.”

The student crowd applauded and cheered when Clinton talked about issues like ensuring equal pay and raising the minimum wage. On the other hand, one student grew so impassioned when Trump talked about his fair treatment of his minority employees that he stood up and shouted at the screen, to the applause of many other students. Clinton coined the phrase “trumped-up trickle-down economics,” and Trump grew flustered when repeatedly asked about his disbelief in President Barack Obama’s citizenship and a past comment he made about Clinton’s "presidential look."

“I liked whenever Donald Trump would be wrong,” Williams said. “I thought it was funny that in many cases anyone can find a tweet on his profile that’s him saying the exact opposite thing, so the ironies of Trump were my favorite moments.”

Although the air in the room was largely against the infamous Republican nominee, some attendees thought Trump actually didn’t do as poorly as anticipated. For political science professor Karen Alter, she thought Trump did have some good moments from the debate.

“I think [Trump] had set his expectations level so low that, in that sense, he did better than expected,” Alter said. “He called Hillary ‘Secretary Clinton' the whole time, which showed he had respect for her, even though he came a little unhinged at the end. He had a message and he delivered it, and so in that sense he was relatively on task.”

At the end of the night, Alter and her colleague, political science professor Jeffrey Winters, led a brief wrap-up discussion on the debate. Afterward, students emerged from Norris still pretty fired up, holding their ‘presidential debate bingo’ cards that had been passed out at the beginning.

“You only get your own debate experience, which matters, but your own experience will quickly become tainted by what you hear about this debate, even though you watched it,” Alter said. “So we have to see what people say. I think this election is really important. I think a lot is at stake, and I don’t study American politics, but I am an American, and I wanted to be part of it.”