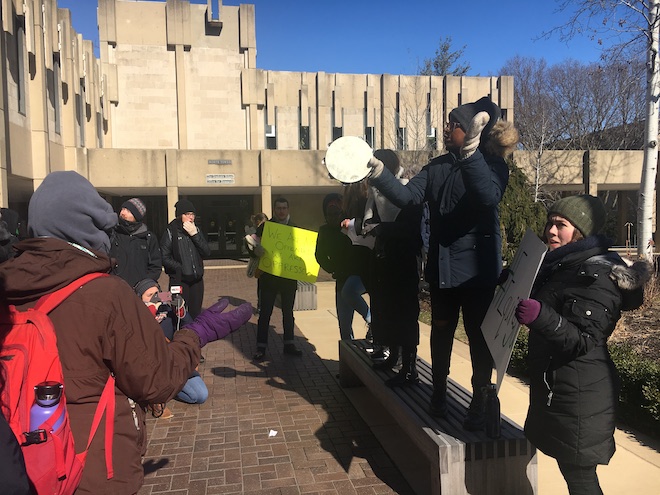 On Friday afternoon, Northwestern Ph.D. student Kalonji Nzinga recited J. Cole to a group of students at the Rock.

“What good is takin' over,” he said. “When we know what you gon' do?” The students yelled back before descending through the Arch, posters in hand.

“The only real revolution happens right inside of you.” Nzinga was speaking Friday at a march he helped organize to protest the presence of psychologist Dr. Satoshi Kanazawa on campus. The protest, organized by Critical Contexts, Black Lives Matters NU and other student groups, was followed by a seven-hour teach-in at Swift Hall.

Kanazawa, an evolutionary psychologist spending his year-long sabbatical at Northwestern, has been a source of controversy for months. Kanazawa, who teaches at the London School of Economics and Political Science, is infamous for his 2011 Psychology Today blog post titled, “Why Are Black Women Less Physically Attractive Than Other Women?” His research, condemned by dozens of evolutionary scientists, has already sparked both a student petition and a town hall meeting calling for his removal.

Even the university itself condemned Kanazawa’s work, but defended their decision to keep him on campus.

“I find that his scholarship presents ideas that are antithetical to values that Northwestern University holds dear,” Provost Jonathan Holloway said in a statement. “As a member of the Northwestern community, I believe that personally held views, no matter how odious, cannot be a reason to undermine the vital principle of intellectual freedom that all academic institutions serve to protect.”

Nikki McDaid-Morgan, a Northwestern Ph.D. student, pushed back against Holloway’s statement. “We are here to stand up against [...] our institution who refused to stand up for equity in favor of academics who spout scientific racism,” she said in a speech at the march.

The protest concluded with a teach-in, where student groups led discussions about academic freedom, scientific racism and increasing empathy in Northwestern’s curriculum. Lynn Meissner, a member of Critical Contexts and an organizer of the event, said she’s proud that they can turn Kanazawa’s presence into a teaching moment. She added that the university should follow their lead.

“I would like to see the university turn this into a deeper sustained conversation about how social science research is used to perpetuate racism,” she said.

The Critical Contexts organizers invited the crowd to edit the demands they plan to present to the administration. The demands included removing Kanazawa, updating the policy for visiting faculty and committing more resources to equity and justice.

“It astounds me that someone with racist beliefs is allowed to even be present on this campus,” she said. “I hope [the administration] re-prioritizes the students over the protection of racists.”