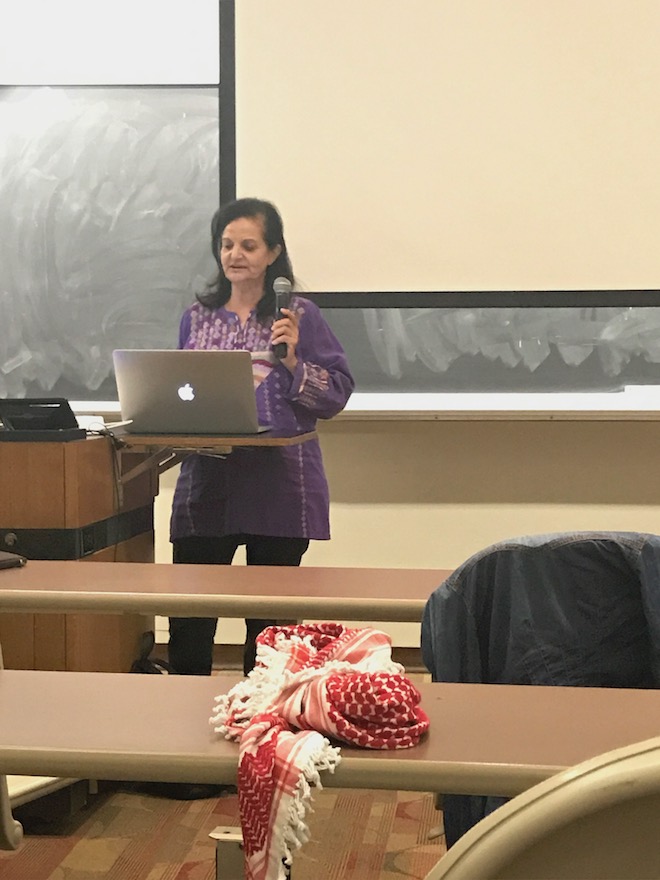 On Monday night, Students for Justice in Palestine (SJP) hosted Palestinian human rights activist Rasmea Odeh and Dr. Nadine Naber, an associate professor at the University of Illinois, Chicago. About forty students and community members attended the event, which highlighted the struggles Palestinians have faced both in U.S. and abroad, along with the roles that sexism and homophobia play in Arab discrimination worldwide.

Odeh, who, for some, is considered a landmark figure in promoting both women’s rights and Palestinian liberation, was imprisoned by the Israeli army during the 1960s, and has testified that she was tortured and sexually assaulted while in custody. In 1969, she confessed to assisting with a bombing in Jerusalem that killed two people; however, she rescinded her confession days after and, in a 2014 immigration fraud hearing, her lawyers said that confession was coerced through physical threats and abuse. As a result of her confession, however, Odeh has become somewhat of a controversial figure (and is considered a terrorist by some), and several organizations held a silent vigil before the event to protest her alleged involvement with the 1969 Jerusalem bombings.

Israeli prisons have been shown to systematically target and torture Palestinians, and according to former SJP president Marcel Hanna, Palestinians are routinely imprisoned without a charge, trial or access to a lawyer. As a result, Odeh said that her story is unfortunate, but not an isolated incident.

“The challenges for us as Palestinian women are very difficult, but we are not frightened,” Odeh said. “As long as we rise up together, we become stronger.”

Odeh has maintained her innocence since her initial confession, but despite her position she was convicted of U.S. immigration fraud in 2014 for failing to report her past conviction in Israel on her immigration forms. The U.S. Justice Department has ordered her deportation for later this year.

“I was arrested on a phony immigration charge, and due to the racist nature of this country’s justice system, I must leave what has been my home for the last 14 years,” Odeh said. “I have to leave behind all the memories and all the people.”

Hanna said SJP wanted to bring Odeh to Northwestern to hear about her human rights work and show solidarity.

“Rasmea has empowered over 800 women and she’s involved in a lot of solidarity work with other movements, but more importantly we wanted to say that we unequivocally stand with Rasmea,” Hanna said. “We understand that Rasmea was sexually assaulted and tortured into confessing a crime she did not commit, so in the larger context this is not just Rasmea – this is a common practice in Israel. Various reports have come out documenting the systematic torture that occurs in Israeli jails and the sexual violence that occurs as part of that torture.”

Although Odeh’s personal story was a central focus of the event, both she and Naber focused on incorporating themes of universality and equal accessibility in their speeches as well. Naber discussed how Muslim men are often equated with homosexuality, which consequently reduces both their sense of masculinity and race. She said U.S. homophobia has allowed Muslim and Arab persecution for decades.

“Often, we think of our struggle as Arabs and Muslims as separate from LGBTQ rights,” Naber said, “but this is an example of how we need to work together.”

Naber also discussed feminism and how women’s bodies have been used as justification for war in the past. She encouraged the audience to closely scrutinize various activist groups’ motives as a result of this dynamic, because although a feminist group may say their work is in the name of women’s rights, that can often indiscriminately impact another group – for example, the U.S. used “protecting Arab women” as a justification for the Afghanistan war, which caused many feminists to support that cause. However, as a result of the U.S. intervention in the region, Naber said Arab women and communities were devastated and not protected at all.

Naber also pointed out how sexism had been particularly relevant in Odeh’s immigration trials. The federal court at the time barred Odeh from testifying to the sexual abuse she said she endured that elicited her confession, which Naber said would have significantly impacted the jury’s findings had they been admitted. This was a point that Northwestern freshman Brenda H., who declined to give her full name, particularly resonated with.

“I thought [Rasmea’s speech] was very inspiring and heartbreaking as well to see that the U.S. and U.S. racism is supporting the persecution of another Palestinian woman,” Brenda said.

Odeh concluded her speech by encouraging the audience to continue fighting against President Trump and his anti-Muslim policies – most notably the “Muslim ban” he issued earlier this year.

“I’m going to have to leave you all at some point in the next few months, but I’m going to be watching your struggle very closely,” Odeh said. “ Your work as young people is vitally important, and I’m going to miss you all.”