In a wild season highlighted by impressive wins, breakout freshman performances and a spot in the Big Ten Championship, Wildcat softball gave everything in the regional tournament, yet couldn’t quite come out on top. 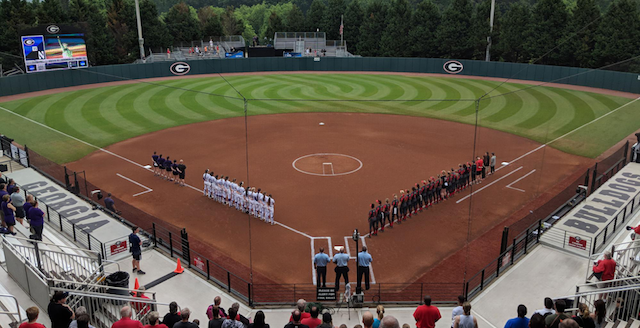 Playing in the Georgia-hosted Athens Regional, Northwestern (38-19) defeated California (35-21) in two close, exciting games, 3-2 (8 innings) in the first game and 4-3 in the second. After each victory, they faced the No. 7-seed Bulldogs (46-11) but ultimately fall by scores of 12-0 and 9-7. The ’Cats finish their impressive 2018 season just short of Super Regionals. Five Wildcat seniors played in their final game on Sunday versus the Bulldogs: Sabrina Rabin, Sammy Nettling, Marissa Panko, Brooke Marquez and Abbey Boyd.

The end of the first game against the Golden Bears was a near disaster. Though Northwestern had taken a 2-0 lead in the fifth inning, California tied it up and was soon in striking position with the bases loaded in the bottom of the seventh. Thankfully, a force out at home plate and a flyout ended the inning mercifully, and soon after Kenna Wilkey hit to centerfield scored Morgan Nelson for the game’s deciding run.

The Wildcats’ next game against Georgia was one to forget. The Georgia offense was relentless, outscoring Northwestern 12-0 with one Bulldog belting three home runs. In the final three innings the ‘Cats loaded the bases but were unable to bring any runners home.

After California eliminated Harvard (who went 0-2 in the regional) a rematch was set up versus Northwestern. The Golden Bears looked poised to get their revenge with a 3-1 lead after the top of the seventh inning, but the Wildcats – no strangers to comebacks – weren’t done just yet.

With one out and runners on first and second base, Rachel Lewis smacked a 2-RBI double to tie the game. Following a groundout and two intentional walks, Wilkey stepped up to the plate with the bases loaded and a walk-off opportunity. However, she never got her chance as Lewis raced to home on a wild pitch to pull off the victory.

Last night was vintage #B1GCats magic. Another shot today in the #NCAASoftball Regional title round!

Finally, Northwestern faced the host Bulldogs one more time (needing to advance with two straight wins over them) and gave them a run for their money. After a four-run third inning for the Wildcats (RBIs from Rabin and Morgan Nelson), they were up 4-3, but the #7-seed responded strongly with a pair of two-run homers in the fourth inning to bring the lead to 7-4.

A crazy fifth inning saw two unearned Wildcat runs score with two outs, bringing the lead down to 7-6. In the next frame, Morgan Newport had the tying run on third base with one out, but the Northwestern batters were unable to bring in the run. A Georgia triple brought two more runs in the bottom of the sixth, and the ’Cats were in peril. Two straight outs in the seventh brought Panko to the plate. She made the most of her final at-bat as a Wildcat, slamming a home run to bring the score to 9-7. Wilkey came up to the plate next with the season on the line, but she struck out to end the game.

Until the very last pitch of the 2018 season, these #B1GCats put on a show. Thank you for following and Thank YOU to our seven seniors!!!

No. 7 Georgia advances out of the Athens Regional, 9-7. pic.twitter.com/zq6xizrUHP

Following Sunday’s game, Coach Kate Drohan commented on the team’s senior class. “We have seven seniors, who are tremendous on and off the field … Their (the seniors) story will be told time and time again. I will tell them thank you every opportunity I can. The younger players understand this is the way we play. They will pick up the flag and carry it.”

Nettling reflected on the Wildcats’ season and the passing of the torch from the older to newer players.. “It has just been incredible. Competing for Big 10 Championships and Regional Championships is why I came to Northwestern … By no means did we achieve all of our goals this year, but we understood how good our freshman class so we could teach them how to continue the standards, expectations and goals of this program going forward.” 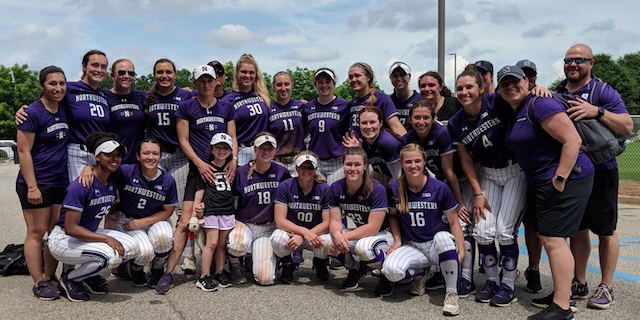 Northwestern poses for a team picture after a game in the Athens regional. / Photo by Northwestern Softball

This month the NFCA (National Fastpitch Coaches Association) awarded All-Great Lake Region selections to Lewis (first team), Nelson (first), Rabin (second, selected all four years), Wilkey (second) and Newport (third). Lewis is a top-ten NFCA finalist for National Freshman of the Year. The finalists will be reduced to three on Wednesday, with the winner being awarded on May 29.