Northwestern softball has had one of its better seasons in recent memory, going 34-16 in the season and 14-8 in Big Ten play. Their success has come in no small part thanks to Weinberg first-year phenom Rachel Lewis. Lewis, who was recently named a unanimous selection to the All-Big Ten First Team and is 11th in the country for RBIs. This weekend, she'll be looking to help her team take the Big Ten Softball Tournament in Wisconsin. 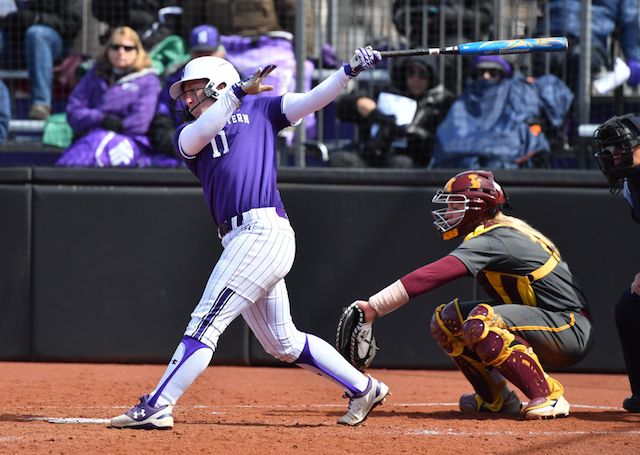 Lewis rounds the bases after one of her 17 home runs this year. Photo courtesy of Northwestern Softball

Note: Both interviews have been edited and condensed for clarity.

North by Northwestern: Obviously, you and the rest of the team have had a tremendous season so far. You have your sights set on the Big Ten Tournament, and even regionals. But going back to the beginning, what made you decide that Northwestern was the place where you wanted to be?

Rachel Lewis: I just think that the environment here is unbeatable. It’s Big Ten, and the competitiveness in the Big Ten is just awesome. The team just vibed really well, so I felt like everyone was on the same plane as far as wanting to do big things.

NBN: It’s no secret that you crushed it in high school and club. With some time to reflect on Division I softball for the season, what were some of the toughest challenges that you had to improve on?

RL: Just the strategy, I think. I think people know me a lot better or can study what they think my weaknesses are. I also have time to study other pitchers and figure out other people’s games, so I think that’s helped. That’s been the biggest part of the game that’s different. 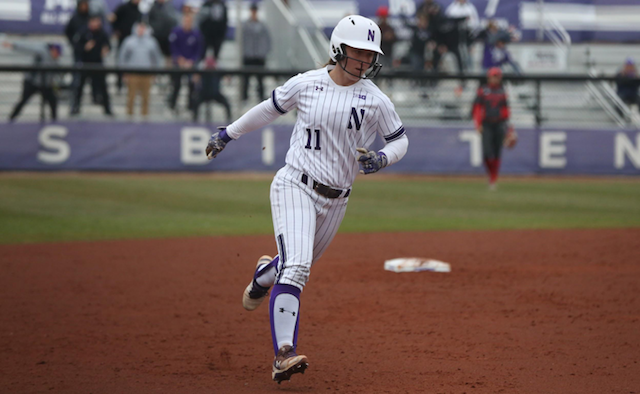 Lewis rounds the bases after one of her 17 home runs this year. Photo courtesy of Northwestern Softball

NBN: What athletes, whether they be in softball or basketball or in another sport, would you say you look up to or take inspiration from?

RL: I definitely like some running backs in the NFL, Ezekiel Elliott and Le’Veon Bell . . . I watch a lot of football.

RL: Yeah, I just like how in-shape they are, and like athletic. I kinda look up to them in that respect. Saquon Barkley. [Laughs]

NBN: Finally, revisiting the past experiences of this season, what have been some of your favorite memories and moments?

RL: Definitely the win against Alabama was probably one of our biggest wins pre-season. That was also when we came together as a team and we really studied the game going into that, and I think we really executed well. And then obviously the series against Minnesota and Nebraska. I think those were big wins because they really set us apart in the Big Ten.

Rachel Lewis with a TRIPLE to cap a three-run #B1GCats rally in the second!#B1GCats 3, Wisconsin 0 | B2 pic.twitter.com/Hog7BMUs8H

NBN: Obviously, Rachel has shined throughout her season, but even beyond the statlines and the RBIs and the home runs, what about her has made her an impactful player on this team?

KD: She wants to win. And she wants to contribute to that win. So here’s how I see that she’s elevated our lineup and our team: She’s someone who hits for average, for power, she’s got great speed. So you insert someone like that in the middle of the order and then all of the sudden the people in front of her and the people behind her are getting better pitches. So [senior] Sabrina Rabin’s an exceptional player, one of the best lead-off players to ever come through our program, and then you put Rachel behind her, and now think about the challenge that an opponent has with our offense. So I think it’s two-fold. I think Rachel’s done great work to prepare herself for the moment and I think everybody else is doing a great job for her to get those opportunities too.