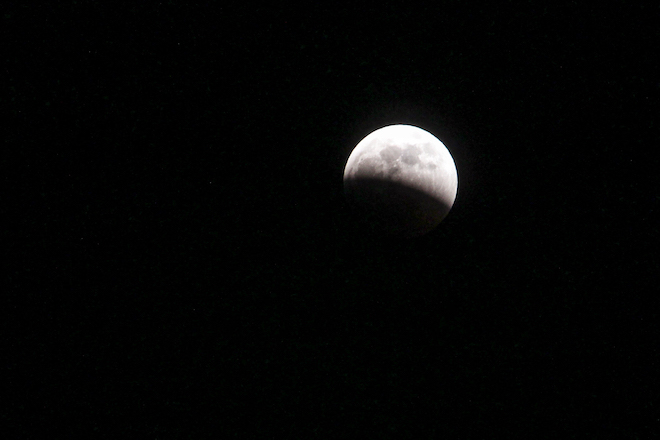 Nothing can stop a Chicago winter: on the night of the lunar eclipse, Dearborn Observatory’s dome was frozen shut. Instead, graduate students and volunteers set up three small telescopes outside. Huddling in thick coats and clutching cups of hot chocolate, students, parents and children headed into the snow to see the eclipse.

When describing an eclipse, graduate student Candice Stauffer said, “To me, eclipses, lunar eclipses and solar eclipses, they’re pretty jarring. I always think back to a time when people didn’t know as much about science as they do today, like what would people have thought?”

But today, scientists have a much stronger understanding of astronomical events, so let’s break down the science of the lunar eclipse.

Lunar eclipses occur when the Earth passes between the moon and the sun. Compared to the Earth, the moon’s orbit is on the tilt, according to Josh Pritz, a Weinberg junior. As a result, the Earth’s shadow blocks the moon twice a year.

During all lunar eclipses, the moon turns red. According to graduate student Cobi Rabinowitz, Earth’s atmosphere functions like a prism that filters shorter wavelengths. Blue light is blocked, and red light, which has a longer wavelength, is bent. Then, the red light is reflect onto the moon, giving it its bright color.

The color is why the lunar eclipse is sometimes referred to as a “blood moon.” People have been calling this lunar eclipse the “super wolf blood moon,” which Pritz calls “absolutely ridiculous.”

During a Q&A, Professor Michael Smutko, who teaches physics and astrophysics, explained the reasoning behind the name. Because of the moon’s orbit, on some days, the moon is closer to the Earth than usual, so it looks slightly larger. Each month’s full moon has a specific name, and January’s full moon is called the wolf moon. However, scientists rarely use the term “super wolf blood moon.”

Though the name might have attracted some visitors to the observatory, viewers missed the height of the eclipse, thanks to the Chicago winter striking again. It started snowing, and clouds blocked the moon. Still, a handful of students stayed, and the skies cleared up briefly, giving them a glimpse of the moon.

“I thought it was a really cool event," Weinberg sophomore Kourtney Kinchen said. "I’m disappointed that it was cloudy, and I would want to see the moon, obviously, but I thought it was well-planned and well-attended.”