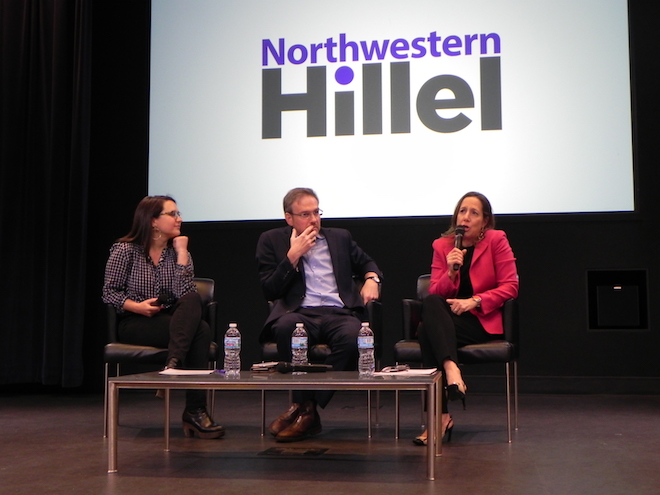 Unlike most writers, New York Times columnist Bret Stephens is not looking for well-received op-eds. Instead, he wants readers to feel “uncomfortable.”

“An op-ed page should not be a mirror, and it should not be a safe space for thinking. It should be a place where you’re going to go and get uncomfortable, and if I’m making people uncomfortable by saying that I haven’t really considered that point of view—if I’m doing it effectively,  I feel like I’m doing my job,” Stephens said.

On Monday evening, Stephens and fellow New York Times columnist Bari Weiss sat down to discuss free speech and democracy. Both columnists have come under fire at times for their controversial opinion pieces: Stephens has been skeptical of climate change since his very first NYT column, and Weiss's "We're All Facists Now" from earlier this year led to calls for her dismissal.

“You really have to not just have a thick skin, you have to believe in what you’re saying and what you want to continue to say no matter what comes at you,” moderator Abigail Pogrebin said.

During a discussion of how to “weather the storm” of call-out culture in an increasingly connected and accountable world, Weiss said that writers just need to “ball up, say what you mean and say it plain” and “if it means that I need to deal with online mobs that call me things that I’m not, then so be it,” referring to the response from her now-deleted tweet regarding Mirai Nagasu, a California-born skater, that read, “Immigrants: they get the job done.”

“Anyone that sort of wants to live a public life in any way these days will have some public humiliation happen to them, whether it’s being raised from their past or tripping over some false line of political correctness that isn’t really there, as I did with my Hamilton tweet,” Weiss said.

Stephens echoed Weiss’ sentiments and expressed concern for incoming journalists and what risks they would be willing to take to “move up the ranks.”

“It’s one thing for me as a conservative writer to say, ‘repeal the Second Amendment,’ or ‘Israel’s right to use lethal force at the Gaza border.’ I can do that, but I do worry about how I would fare in the current environment if I were that 24-year-old kid just starting out,” Stephens said.

During the discussion of free speech and controversial speakers on college campuses, Stephens referred to Kevin Williamson, a commentator who has said that he “ha[d] hanging…in mind” for people who have had abortions and was fired after repeating his sentiments on a podcast. While Stephens thinks that his views are “horrible,” he disagrees Williamson’s statements should disqualify him from having a platform.

“It is important that mainstream institutions accept opinions that may be on their face outrageous and wrong; there’s a certain kind of virtue in doing that,” Stephens said. “Should he have been de-platformed? Should he have been fired from The Atlantic? What should that mean in terms of our discourse in general?”

In response to the notion that speech can be a form of violence and the existence of microagressions, Weiss claimed that it is a “false idea that speech is violence.”

“This is an idea that on its face is absurd to me,” Weiss said. “Speech can be hurtful, but not violent….Usually the people wielding language like, ‘I’m traumatized by what you said,’ I heard that a lot in response to a tweet that was quoting a Hamilton lyric. When 60 or 70 articles are written about the microagression and the trauma embedded in a one-line Hamilton quote, I become sort of skeptical about what the true intentions of those people really are.”

Sheng-Yuan Kao, a postdoctoral fellow in the Northwestern materials science department, was especially interested in what both columnists had to say.

“One of the speakers said that the university should be a place that all of the members contribute different thoughts and clash together," Kao said. "A university is the safety place for thought, rather than from thought. That really moved me."

At the closing of the Q & A, Stephens discussed the intersection between free speech, discourse and the duty of journalism.

“Great journalism [should make you] think seriously about points of view that you might abhor, think are stupid and otherwise wouldn’t give the time of day to them. Give them the time of day,” Stephens said.