Picture this: a group of male students gathered together in a room, laughing and joking as usual. But, they’re not talking about how hard they went at the gym yesterday or the girl one of them got with that weekend, as people usually assume most men do. Instead, these men are discussing how those stereotypes feed into attitudes and behaviors that contribute to gender-based violence. Or, they’re deconstructing where those ideas about masculinity came from in the first place. Whatever they’re talking about, each one of them feels safe, valued and supported.

NÜ Men, a six-week discussion group of men that do just that, will host its first meeting next Tuesday, Oct. 18. The program debuted last spring, and this year will kick off again with a new cohort of male students looking to discuss topics such as how to prevent gender-based violence. 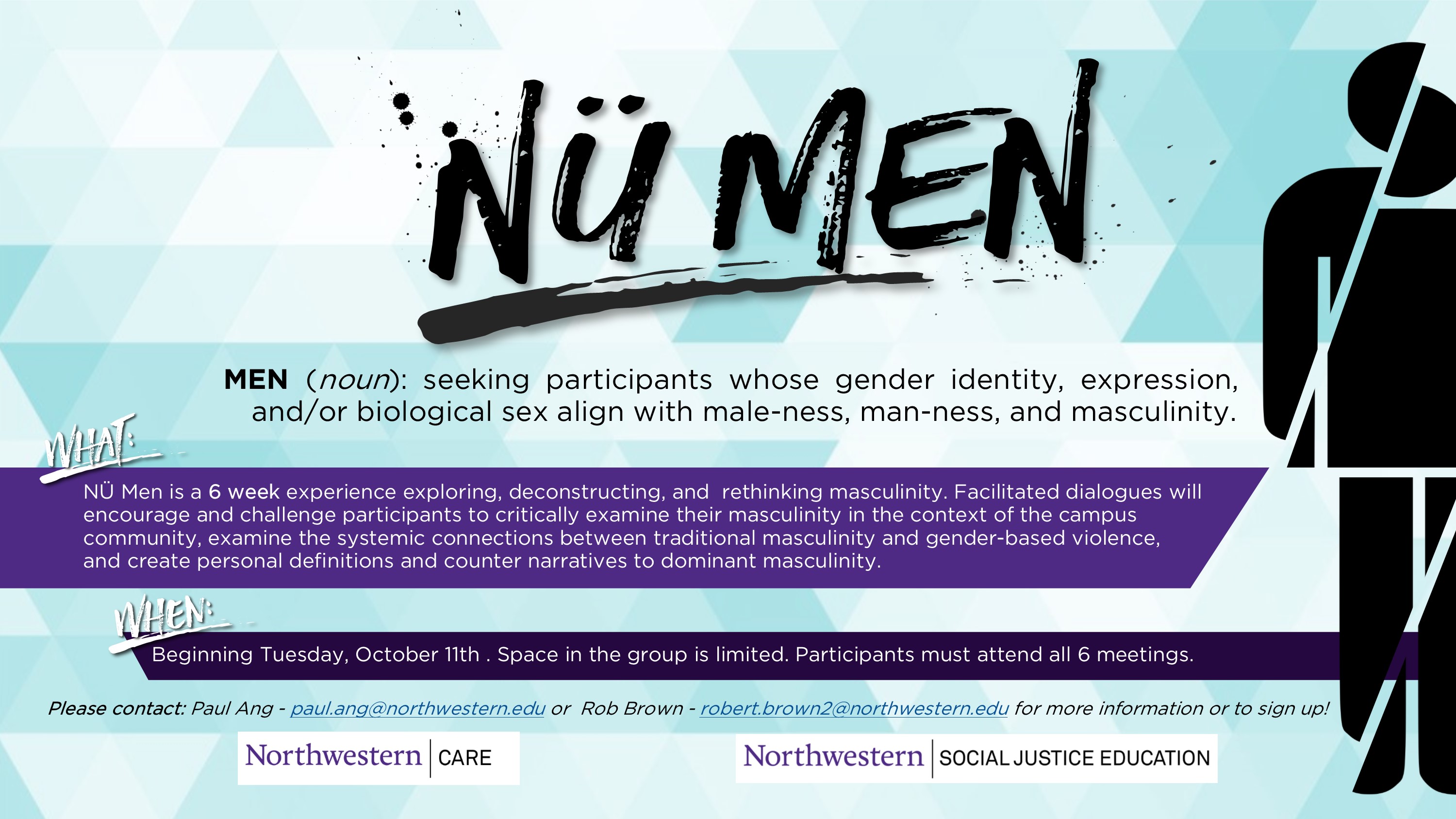 “NÜ Men really went through the fundamentals of what masculinity is, how popular masculinity is in the ways society tells men how to be and how it affects gender-based violence, depression and all those kinds of issues,” said McCormick third-year senior Rovik Robert, who participated in the program last year.

Paul Ang, the director of men’s engagement at CARE, started the program last spring after leading a similar initiative at Syracuse University. In order to start a campus-wide conversation, Ang partnered with Social Justice and Education Director Rob Brown. Their goal was to lead NÜ Men through issues like ending violence, recognizing privilege and practicing emotional intelligence.

“I would hope that some of the people coming out of the program would then have the skills to be active themselves or to challenge their friends to help start ending gender-based violence,” Ang said.

NÜ Men provides an opportunity for men looking for a safe space to discuss their masculinity. Each discussion is predominantly student-led, with occasional input from Ang or Brown, and supplemented by activities like journaling and watching videos. Participants can share personal stories and issues they’ve struggled with in defining their own masculinity.

“That community-building process tends to be really transforming and creates an outcome where students realize they’re not alone in their personal struggles they’ve had,” Brown said. “Something I find to be really important is to push myself and others into a space of vulnerability, and model not what perfection looks like in promoting gender equity, but promoting what imperfection looks like and then having the sustainability and resilience to stay with it.”

The program attracts a variety of students from different backgrounds. All graduate and undergraduate students who self-identify as male are invited to join. Weinberg senior Daniel Loizzo said he attended a few sessions last spring to bring some new context to his role as president of Men Against Sexual Assault and Rape (MARS).

“I was one of two people there that were involved with MARS, but everyone in that group knew we were there for the same reason: to learn more, understand more and eventually use that information to promote healthier sexual relationships and a culture on campus without rape and sexual assault,” Loizzo said.

Robert, who serves on the Interfraternity Council Executive Board, decided to participate to learn more about how to combat "toxic masculinity" in Greek life organizations on campus.

“A lot of [fraternity] chapters function on some type of a premise of toxic masculinity–they think to be a man you need to drink a lot, or have a lot of sex or be able to go to the gym a lot,” Robert said. “Those are very difficult things to deconstruct at an institution that’s built on those values, and it’s always a good idea find a space where you’re around other men and go through your masculinity in a proper way.”

Although NÜ Men provides a safe space to discuss masculinity with other men, it often takes a considerable amount of encouragement to get students interested. The program was originally scheduled to kick off on Oct. 11, but was postponed a week to allow for a few more people to sign up. The program caps at 12 participants, but Ang said the ideal range is between eight and 12 students.

“It’s a very welcoming group,” Loizzo said. “ Not only is [NÜ Men] going to provide you a better understanding of masculinity in the broader spectrum, but it may help you understand a little bit more about yourself and where you sit on these issues as a man at Northwestern and in the greater world.”