We've all heard the joke that you can get your tuition paid if you get hit by a car on campus. Here at Northwestern, you can get enough cash to fund weeks of drinks at Norbucks for one small price: getting mono. Students, as part of a study about risk factors that may predict Chronic Fatigue Syndrome after mono, are getting paid for answering questions and giving blood when they contract the disease – and have subsequently turned it into a running joke around campus.

“It was kind of a joke,” said Medill sophomore Maddie Jarrard, who participated in the first part of the study last year. “There have been times when my friends have had mono and they’re enjoying their drink or something and I’m like, ‘Hey, you wanna pass that over here, give me some money?’”

These kinds of jokes stem from a paid research study on campus conducted by Dr. Ben Katz of the Department of Pediatrics. Participants fill out three questionnaires – approximately 5-10 minutes each – and donate a blood sample for the first part of the study, for which they are paid $60. Students may return for the second phase of the study if they contract mono and then again six months later for part three – and they will earn $100 each time.

Infective mononucleosis, or mono for short, is usually caused by the Epstein-Barr virus and includes symptoms like fever, headaches, fatigue and sore throat. Called “the kissing disease” because it spreads through sharing saliva, mono will infect 95 percent of people by their late 30s, though they may not show symptoms. About five percent of students will develop mono during college, according to Katz. 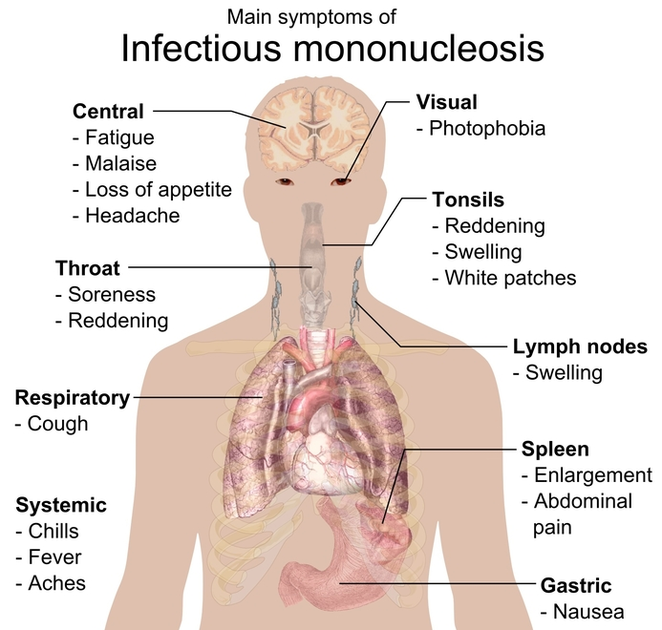 The study’s goal is to gain insight that will help researchers predict which young adults will develop CFS – lingering fatigue often accompanied by lightheadedness or dizziness when active, sensitivity to light and sound, slow thinking and other symptoms – after having mono, as early as possible. While about 10 percent of people with mono will develop CFS, experts do not know what causes it other than that it often follows a disease like mono.

Students could earn up to $260 for helping scientists research the illness; it’s little wonder that jokes like Jarrard’s have come as a result of this possibility.

The simple answer: Not good.

Weinberg freshman Maddie Fink had barely been on campus for a day when she was diagnosed with mono. Her symptoms lasted for about a month, forcing her to spend lots of time in her room focusing on recovery.

“My throat was swollen shut, so I had to be on steroids so I could eat,” Fink said. “I was exhausted. I had a fever for like three weeks, fatigue, all those sorts of things.”

While having mono at the beginning of freshman year can make it difficult to meet people, Fink said she got lucky because she had made a lot of friends on her pre-orientation program. Because of that, her female friends came to her in her room, but Fink said she didn’t get to meet many guys at the start of the year.

Having mono in college also takes a toll on school work. Fink said mono caused her to struggle in Fall Quarter.

“I had to drop a class and I really couldn’t do anything for a while, so my grades right now are definitely not what they would be if I didn’t have mono,” she said.

Fink is not alone – Weinberg freshman Julian Freiberg was diagnosed with mono and strep throat at the same time. Freiberg suffered from fatigue, chills and a sore throat. He too struggled to keep up with schoolwork.

“It definitely made it hard for me to do a lot of the homework and readings when it first happened,” Freiberg said. “I can’t really work for extended periods of time, which makes it hard to catch up.”

Though Fink did not participate in the mono study, and therefore did not get paid, she said she could not put any dollar amount on the suffering caused by mono.

“It’s really not worth it, period,” Fink said. “I wouldn’t care about any sort of monetary compensation – it just sort of sucked, and I’m happy it’s over. I would never want to do that again.”

The financial incentive is a major factor drawing students to the study. For many, getting paid makes it all worth it. The prospect of earning money even pushes some students to step outside their comfort zones.

“Even though I’m pretty afraid of syringes or shots or anything like that, I am a poor child and a sucker for money, so I went and got my blood drawn for $60,” Jarrard said. “I probably wouldn’t have done that if there wasn’t that kind of incentive.”

Just as no one’s going to jump out in front of a moving vehicle to get their tuition paid, most students who joke about contracting mono for the study probably don’t plan to actually follow through. It seems the costs of mono outweigh the possibility of $100 in their pockets.

However, if a student participating in the research study does happen to get sick, the money they earn can make their situation a little less dismal.

“We don’t want people to get sick, obviously,” Katz said. “But if you get sick, maybe we can learn something, and you’ll earn a few dollars.”