The scene didn’t match the moment.

At an Allstate Arena filled with the typical unwelcoming fan environment for the Wildcats, three seniors found themselves inches from the finish line of their collegiate careers. 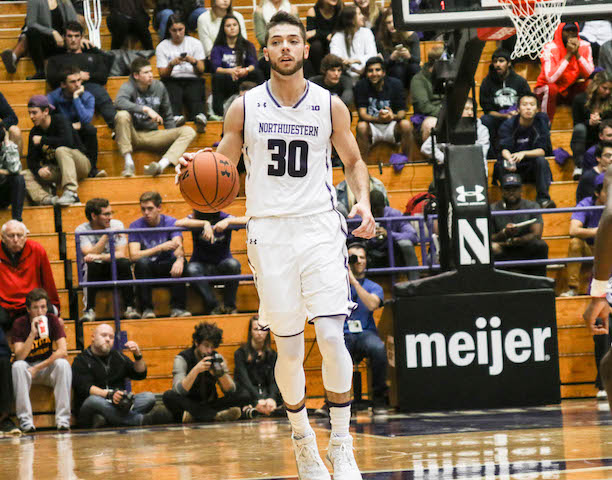 McIntosh will be remembered as a key piece in Northwestern Basketball's national emergence. Photo by Mia Zanzucchi / North by Northwestern

In a season where things simply aren't what they were supposed to be, Bryant McIntosh, Scottie Lindsey, and Gavin Skelly were close to a win against a mediocre Wisconsin team that would’ve given the team a morale boost for the upcoming Big Ten Tournament. But like many things Northwestern this year, things came to an unsatisfying yet eventful ending.

Though Northwestern (15-15, 6-11) tried, they simply couldn’t pull the pieces together to take down Wisconsin (14-16, 7-10), falling 70-64 after a rough last minute of the game. The score was 65-64 with a minute remaining after Lindsey (26 pts in 40 minutes) pushed through a tough Badger defense to put the contest within 1. Though Dererk Pardon (10 pts, 9 rebounds) appeared to force a turnover on the Wisconsin offense with 30 seconds remaining, the Badgers managed to somehow recover it and pull off a decisive 3-pointer as the shot clock expired. To add insult to injury with ten seconds to go and a loss all but secured, the Wildcats turned over the ball on offense and effectively ended their season at the Allstate.

The game was rough from the start for the ‘Cats. An early 9-0 run by Wisconsin off of some Northwestern turnovers turned into a barrage of 3-pointers, with the lead for the Badgers reaching 24-13. Eventually, however, they wouldn’t be able to hold up toward the end of the first half, as the Wildcats clawed back to a 31-30 deficit with the Allstate Arena lighting up.

.@Bryant_30_Mac came into this league dropping dimes, and he sure isn't gonna stop now.

The senior finds @dererk5 for the @NUMensBball flush on senior night: pic.twitter.com/cRLSztcsr9

Wisconsin would answer back and make it 38-32 heading into halftime. But upon return to the court, their offense froze, scoring only two points in the first five minutes of the second half. The ‘Cats would briefly hold a small lead amid their scoring woes, yet it wouldn’t last for long, as the Badgers would try pulling away again. Northwestern would try keeping pace,  performing well in crucial moments down the stretch, but their efforts wouldn’t be enough in the end.

After the game ended, McIntosh, Lindsey, and Skelly were all honored in the Senior Night ceremony. Along with framed jerseys and families in tow came standing ovations from the crowd for a group of men that had taken Northwestern basketball into the national spotlight.

After the game, head coach Chris Collins acknowledged the underperformance of the team this season, but made clear that the seniors would not be looked at differently. “I want those guys to know that [this season] doesn’t shape their legacy,” he said. Collins soon added, “they’re judged by a four-year body of work,” and was visibly emotional by the end of his interview.