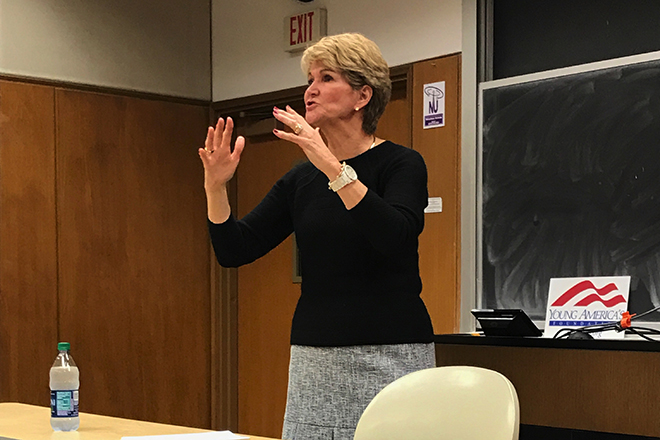 “I love Donald Trump,” College Republicans fall speaker Angela ‘Bay’ Buchanan said Thursday night to an audience of about 50 students. “I have been supportive of him for over a year. Is he a perfect candidate? No, but I haven’t seen one yet.”

Buchanan, who served as U.S. treasurer under President Ronald Reagan, spoke to Northwestern students about the positive changes president-elect Donald Trump could bring to America over the next four years. She drew multiple comparisons between him and Reagan, which received applause from the primarily-conservative student audience.

“A lot of people are very uncertain about what Donald Trump means for the presidency and the future of the Republican party,” College Republicans president Jack Stucky said. “I think Ronald Reagan is someone who everyone regards as a respected figurehead, so I think bringing Bay here to campus was a good way for us to relate Donald Trump back to some more established figures in the Republican Party.”

Many of Trump’s similarities to Reagan that Buchanan identified involved economic policy: both candidates campaigned on the promise of massive tax cuts and decreasing tax regulation. However, the main difference she identified between the two is that Trump is not as concerned with political correctness as Ronald Reagan was – a quality she said was something to be celebrated, because it encourages people to voice their beliefs more freely.

“I believe Donald Trump has shown the American people how to be American again,” Buchanan said. “He has broken the back of political correctness, and maybe the neck. I encourage people to vote for leaders like him who speak their minds.”

Trump’s disregard for political correctness fueled much of the nation’s negative reaction to his election. College Republicans event coordinator Grant Papastefan thought Buchanan’s message was particularly relevant here at Northwestern, where students have been protesting the election results ever since they were announced.

“This campus paints itself as such a loving and accepting place, but is that really what it is?” Papastefan said. “I’ve had four people walk up to me in the past week, because they know I’m a politically active voice on campus, and say, ‘I’m so glad to know there’s another one of us [Trump supporters]’. So I think what she said is excellent, because I think it inspired more people to voice their opinions.”

Toward the end of her speech, Buchanan encouraged students to become leaders on campus, even if their opinion is unpopular. Great leaders, she said, speak their minds without fear of repercussions and debate issues they are passionate about with the opposing side. She drew on her own experience being labeled a racist, due to her views on immigration, as an example to encourage students.

“The students on campus have to say ‘no more’ to political correctness,” Buchanan said. “I personally answer to the name 'racist.' You say ‘racist,’ I say, ‘Do you need something?’”

For students frustrated with the state of America, Buchanan’s speech provided just the encouragement they needed. After the speech, nearly half the audience stayed to try and talk with Buchanan or talk about her points with others in the audience.

“I thought [Buchanan] was absolutely incredible,” McCormick senior Anna Petersen said. “She really hit the nail on the head, especially on so many of the more controversial issues regarding Donald Trump. The message she really drove home was he has the potential to be an outstanding president and turn our country around.”