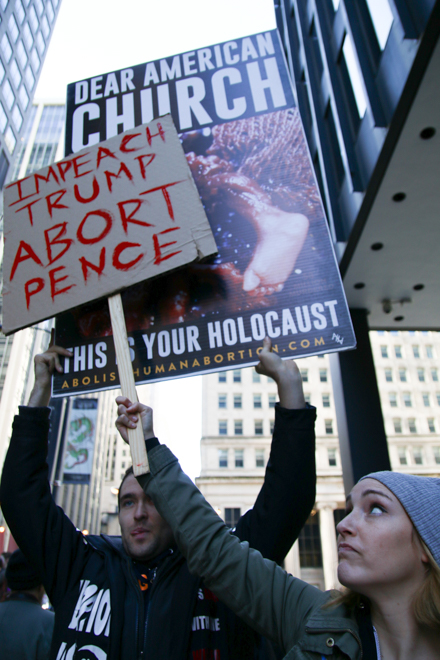 Landmark Supreme Court case Roe v. Wade celebrated her 44th birthday this past Sunday, marking over four decades of accessible, legalized abortion in the United States. Since the 1973 ruling, states have been prohibited from enacting their own anti-abortion laws, especially during the first trimester of pregnancy, under a woman’s 14th Amendment right to privacy.

However, the mood wasn’t all festive when Roe v. Wade blew out her candles earlier this week. Newly-inaugurated President Donald Trump has vowed to overturn the contentious court ruling, which could be devastating to women’s reproductive rights. But, the new president has also said he wouldn’t outlaw abortions completely. Instead, he may simply turn it over to the states to decide, and women living in anti-abortion states could then travel to a different state to get a procedure. So what would all this mean, and how much danger is Roe v. Wade really in?

The most direct threat to Roe v. Wade specifically comes from the current Supreme Court opening left after Justice Antonin Scalia’s death last year. While an addition of one conservative justice to the Court would not be enough to overturn the ruling by itself, any following vacancies Trump may fill could tip the scales against Roe. (Which is still concerning, as Democratic justice Ruth Bader Ginsburg is 83, and swing voter Justice Anthony Kenney is 80). If Roe v. Wade is overturned, abortion rights would be determined by each individual state – and many states, like Texas or Ohio, would likely outlaw it completely.

But the threat against Roe v. Wade isn’t the only imminent danger for women’s access to abortion. On Tuesday, the House of Representatives passed HR7, also known as the No Taxpayer Funding for Abortion and Abortion Insurance Full Disclosure Act. This makes the Hyde Amendment, which prevents the use of federal funds for abortions, a permanent law (as opposed to something that has to be voted on every year). This amendment primarily impacts low-income women because it prevents Medicaid recipients from using insurance money for abortions.

On an international level, Trump has already reinstated something known as the “global gag rule,” which prohibits U.S. aid from going to any private organizations that provide abortions or even discuss them as an option with families. This rule has been on-and-off since Ronald Reagan first implemented it in 1984 – Bill Clinton repealed it immediately when he took office, then George W. Bush immediately reinstated it during his presidency, only to have Obama immediately repeal it in 2008.

Studies conducted by Population Action International (PAI) show that every time the global gag rule returns, more women in developing countries die or become disabled due to unsafe abortions. Rather than encouraging women to use contraception or practice abstinence to avoid unwanted pregnancies, the gag rule further pushes them toward black market or illegal abortions that can be dangerous and even fatal.

In addition to removing funds from international abortion-friendly organizations, Trump has also vowed to achieve the Republican Party's long-sought-after goal to defund Planned Parenthood here in the U.S. In December, the Obama administration enacted a law to protect the organization’s funding, but Trump would be able to reverse that law rather easily with the current Republican majority in both the House and Senate. House Speaker Paul Ryan has also promised to defund Planned Parenthood as part of the government’s larger goal to repeal Obamacare – a move that would likely lead to the organization having to close its doors permanently.

Although opposition to Roe v. Wade is nothing new (i.e., Ohio’s attempted “heartbeat bill”), President Trump is attacking the issue with never-before-seen levels of commitment. Vice President Mike Pence has also been known to be staunchly pro-life, and the two in the Oval Office (plus the Republican majority in the House and Senate) may finally have the leeway conservative pro-lifers have been searching for to ensure Roe v. Wade doesn’t live to see another president.